After a year of severe drought, many local farmers are happy to get out of the fields with average harvests. Still, some bit the dust on yields.

U.S. Senators Amy Klobuchar and Al Franken and Representative Tim Walz announced Friday that the U.S. Department of Agriculture issued a disaster declaration for several counties in Minnesota, including Freeborn, affected by the ongoing drought. This declaration means those farmers are now eligible for emergency loan assistance from the Farm Service Agency to help offset crop or livestock losses.

Yet farmers from many area towns were pleasantly surprised with their crops. 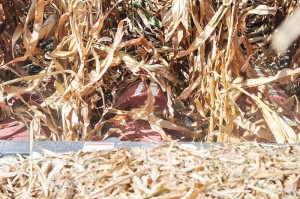 The tines of farmer Jim O’Connor’s combine cut through corn in a field he was harvesting northwest of Austin in September. -- Eric Johnson/Albert Lea Tribune

“We were just a half-inch or an inch away from a phenomenal crop,” Brian Hanson of Grand Meadow said. “I’m satisfied.”

Still, Hanson and others know crops to the south of them, especially in sandy soils were depleted.

“The word on the street is that guys are hurting really bad not too far away,” Hanson added.

Dan Erickson of Alden said his crop wasn’t great but was better than expected. He added farmers to the south of him in sandy soils had problems, too.

“That’s where they struggled in our county,” he said.

“The ongoing drought is continuing to put a strain on Minnesota’s farmers and ranchers,” Klobuchar said in a news release. “Today’s action is an important step in helping our producers get through these challenging times, and I will continue to fight to move forward the five-year Farm Bill that the Senate passed in June, which includes critical drought relief programs to support Minnesota’s farmers and ranchers.”

Farmers in southern Mower County, near Lyle, some say, may have been hit by the drought hardest. Bruce Nelsen of Rose Creek suspects nearly half of Mower County struggled with the drought this year. For those reasons, more so in other counties, as well, legislators pushed for drought relief.

“Minnesota is a farm state — one in five jobs is related to agriculture — and this assistance will give our farmers and livestock producers some help so they can survive this year’s drought and get back on their feet,” said Franken. “Farming is inherently risky, and that’s why it’s so important that the House of Representatives pass the Senate’s Farm Bill, so our farmers know they can count on a safety net when a bad year hits.”

Earlier this year Klobuchar and Franken sent President Barack Obama a letter urging a coordinated and immediate response to the drought. In the letter, the senators called on the president to quickly form an Interagency Drought Task Force to bring together officials from every federal agency to coordinate responses and help provide relief to those affected by the drought.