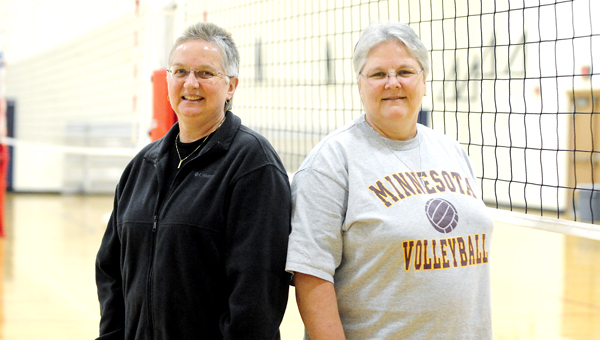 After the Tigers’ last home volleyball game on Oct. 16, two of their long-time volleyball judges walked off the court for the last time — as official’s assistants.

Sue Brown and Linda Distad have served as line judges at Albert Lea High School since 1992. Even though they are putting their part-time job to rest, they will return to the courts to root for the home team with the bias they couldn’t express before.

Line judging wasn’t just a job. Volleyball has always been an interest to the pair.

“If we didn’t like it, we wouldn’t have stayed all these years,” Brown said. “We hadn’t ever sat down and figured out how long we’ve been doing it before.”

Brown added the game is what keeps her young in some ways.

They both played volleyball in high school when volleyball was just becoming a girls’ sport and then continued in Park & Rec afterwards.

Distad eventually became an elementary physical education teacher and started the volleyball program at Glenville-Emmons school in 1974 with Sherrie Gayken.

Gayken moved into the Albert Lea School District and was the one who influenced Brown to become a line judge. Brown said she had been an official for 17 years before she switched and Distad ended up in Albert Lea after a layoff at Glenville-Emmons. They said line judging was a nice change because there was no traveling involved.

Brown said she and Distad tried to be the best line judges they could be after knowing what it was like to have one work for them.

“We took it seriously; we called it as we saw it,” Distad said.

It was often a reunion each season when the two would run into officials they had worked with before.

“They would say, ‘Are you guys still here?’” Brown said.

The women said it’s emotional to be done, but it just seemed like the time was right to wind down from the rush of getting to the matches after their full time jobs.

Brown joked the only thing she won’t miss about line judging is chasing after balls.

Distad and Brown’s plan for retirement from line judging includes watching the University of Minnesota volleyball team, other local teams and working their full time jobs at Sterling Drug and Usem’s in Austin, respectively.