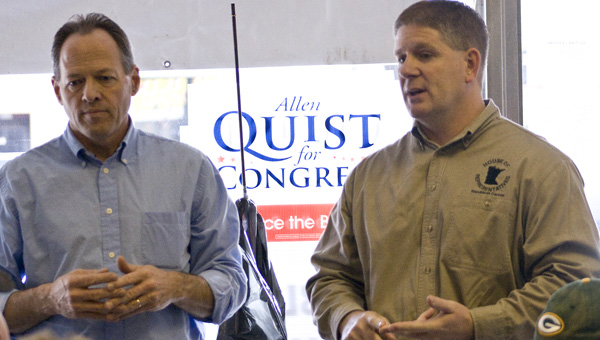 Minnesota Speaker of the House Kurt Zellers praised District 27A Rep. Rich Murray Friday calling him a “perfect fit” as a representative.

During what was a campaign stop at the Freeborn County GOP Headquarters in downtown Albert Lea, Zellers, R-Maple Grove, asked about 20 local Republicans to re-elect Murray, R-Albert Lea.

“He’s one of the hardest working guys at the Capitol,” Zellers said. 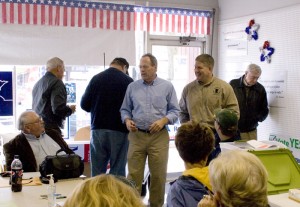 The visit came as both Republicans and Democrats around the state are making a last-minute attempt to rally voters prior to the election. Earlier in the week, Minnesota Gov. Mark Dayton stumped in town for one of Murray’s opponents, Shannon Savick, DFL-Wells. Dayton is also expected back in the city next Friday for a rally with other DFL leaders.

Zellers, who has been the Speaker of the House for almost two years, commended Murray’s background as a small business owner who is involved with the community and who has a high priority for family. He said it is notable that Murray is running for office to help make a better future for his children and grandchildren.

“We have left them a mess, and we need to fix it,” Murray said.

Following the stop at the headquarters, Zellers and Murray were expected to go doorknocking, along with about a dozen others, to drop off campaign literature within the city.

“We have some good ideas, and we need a couple more years to work on them,” Murray said.