Loss of credit would put project on hold 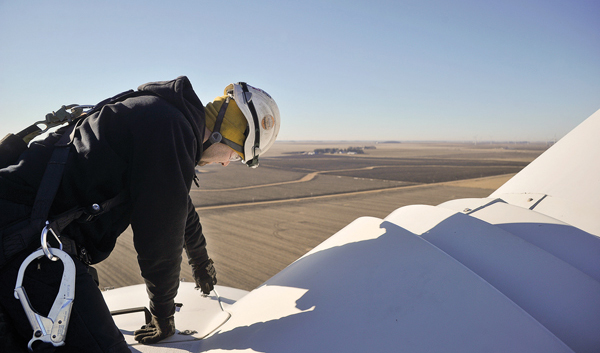 AUSTIN — In December 2010, the largest wind farm project to date in Mower County got the green light to start construction.

“It’s going to bring in a lot of good jobs, a lot of taxes to the area,” said landowner and Dexter Township Supervisor DuWayne Skov during a meeting in 2010.

But nearly two years later, RES Americas’ 300-megawatt Pleasant Valley Wind Farm project is still on hold, largely due to the looming Dec. 31 expiration of the federal wind production tax credit, a key subsidy for wind energy — not to be confused with Minnesota’s separate wind energy production tax, which provided $1.5 million for the county, townships and schools in 2012, something that has nothing to do with the federal credit. 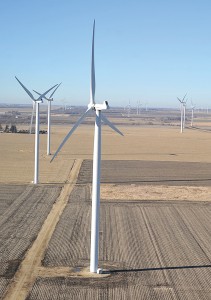 Windtowers sprout up out of the country side south of Grand Meadow.

“Pleasant Valley is fully permitted and shovel-ready, but due to the uncertainty regarding the [production tax credit,] buyers are on the sidelines, and this is slowing down the project’s advancement,” RES Americas Vice President of Development Joe DeVito said in an emailed response to the Herald.

The federal credit provides subsidies to help wind power compete with other sources of electrical power.

Existing wind farms won’t feel the effects if the credit expires, but new projects already have.

“It would be a detriment to the new projects,” said Commissioner Ray Tucker, who has long supported the wind industry locally. “Existing projects are all fine.”

Tucker expects the credit to eventually be renewed, and he’s hoping it will help developer RES Americas find a buyer for the project’s energy.

“We’d like to pick up that RES project,” he said, noting it would be a benefit for the county.

DeVito, the head of RES Americas’ Minnesota office, described the American wind industry as a “major success story,” noting it has attracted more than $15 billion in private investments each of the last five years.

But the biggest impact could be on the more than 400 manufacturing facilities DeVito said support the U.S. wind industry.

“The wind industry employs more than 75,000 American workers — yet literally half of these jobs are in jeopardy if the wind energy tax credit isn’t extended,” DeVito said in an email.

Others agreed the credit’s end could and already has stymied manufacturing growth and long-term economic development.

“Without it, what you really do see is a really significant impact on manufacturing jobs,” said Roby Roberts, vice-president of communications and government and regulatory affairs for EDP Renewables. EDP is the project developer of the High Prairie Wind Farm based out of Le Roy.

Even if the credit is renewed — which many expect it will be — it has already had an effect on the industry. Far fewer wind projects are projected for 2013, according to Roberts, because companies are leery of continuing until the credit’s future is resolved.

“Without the production tax credit, we are very pessimistic about much happening in 2013,” Roberts said.

Manufacturing jobs are already being cut throughout the U.S. wind industry.

Vestas, the company that built and maintains the turbines at High Prairie, already reduced its manufacturing workforce at two blade factories in Colorado, according to Andrew Longeteig, a communications specialist representing Vestas.

“The U.S. wind industry has already slowed, largely due to the uncertainty of the federal production tax credit extension at the end 2012,” Longeteig said in an email. “This has led to a significant reduction in turbine orders for Vestas in 2013, and the market slowdown is affecting the company’s manufacturing facilities in Colorado.”

Vestas decreased its manufacturing workforce in Colorado from 1,700 to 1,200 in 2012. Overall, Vestas reduced its workforce in the U.S. from 3,400 employees to 2,600 — about 20 percent — largely due to the uncertainty surrounding the production credit’s future, according to Longeteig.

DeVito said the credit promotes efficiency and innovation because rewards from the credits are based on the level of energy production.

Even with the credit potentially expiring, Riverland Community College wind program instructor Steve Vietor isn’t concerned about the future for his students.

“Without the production tax credit, we still will be providing the basic manpower needs to support this industry and it’s a broad industry,” he said.

About 26 students are in their first year at Riverland’s wind technician program based in Albert Lea.

Along with turnaround of existing positions, Vietor said many wind companies are placing more of an emphasis on maintenance to keep turbines producing.

“What we’re seeing in the industry is a need for more technicians,” he said.

Vietor also referenced the proposed Chokecherry And Sierra Madre Energy Project in Wyoming, which could be the largest wind project in the U.S. at up to 1,000 turbines, as a sign the wind industry is still going strong.

Like Tucker, Vietor expects the credit will be reinstated and said the election is probably the key reason for the delay.

“Unfortunately, everyone always waits until the end of that election year,” he said.

And, Vietor said the government subsidizes coal and oil energy just as much — if not more — than wind.

Though Congress is gridlocked in Washington, D.C., Roberts said he hopes that after the election Congress will renew the federal wind production tax credit.

But he noted the damage has already been done, as many companies have been stalled for two years waiting to see what Congress does.

“That has harmed us in terms of what we’re doing with our projects,” he said.

According to Vietor, Congress doesn’t fully understand that waiting until midnight to address the issue has kept companies from developing projects.

“They didn’t realize the impact to the development of the wind industry over the last two years,” he said.

But Vietor was more positive, noting that even if it is allowed to expire, he expects many projects will move ahead with or without the credit.

Still, Vietor said the tax credit has been too beneficial to manufacturing and other jobs for Congress not to renew it.

“The production tax credit really has done a lot to create jobs,” he said.

DeVito said Republicans and Democrats have both supported this credit in the past, and he called them to come together and extend the credit.

“Congress must come together on this vital issue, and ensure that the PTC extension becomes law,” he said in an email.