Man pleads not guilty to stabbing

An Albert Lea man pleaded not guilty this week to stabbing another man in the stomach during an altercation in September. 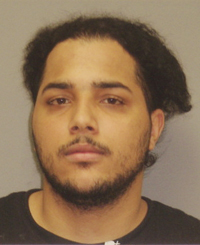 He invoked his Sixth Amendment right to a speedy trial.

The alleged stabbing took place Sept. 5 after Rodriguez-Reyes and another man reportedly jumped out of a brown car and began fighting with the alleged victim and his friend on the 1200 block of South Newton Avenue, according to court documents.

The alleged victim and his friend were walking on the sidewalk to a nearby house reports stated.

Rodriguez-Reyes and the victim reportedly ended up on the ground, and when the victim stood up, he realized he had been stabbed once in the stomach, the report stated.

Rodriguez-Reyes and the other man reportedly fled, according to police.

The victim was taken to the emergency room at Mayo Clinic Health System in Albert Lea where he underwent surgery.

Rodriguez-Reyes was identified in a police photo lineup and was arrested the next day at a residence on West William Street, according to court documents.

He remains in the Freeborn County jail on a $100,000 conditional bail.