Funeral services for Mary L. Johnson of Albert Lea, former Hopkins resident, will be at 10 a.m Saturday at the Washburn-McReavy Funeral Chapel, 1400 Main St., Hopkins. Interment will be in Faith Presbyterian  Cemetery, Hopkins. Visitation with be one hour before services at the funeral home on Saturday. 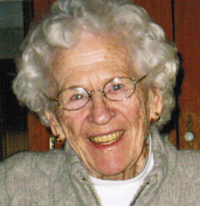 Mary died peacefully on Monday, Oct. 1, 2012, at the Good Samaritan Society in Albert Lea, at the age of 99. She had moved to Albert Lea to be near son Don and his family.

Mary Lucy was born on May 27, 1913, in Hopkins, the daughter of Joseph and Lizzie (Pulkrabek) Empanger. She attended Hopkins Schools, and then completed training at beauty school.

Mary married Selmer Johnson on July 3, 1937, in Hopkins. They made Hopkins their home.  Throughout her life, Mary had owned her own beauty shop, worked at the Oak Ridge Country Club and also did catering.

She had been a member of the Order of the Eastern Star and Faith Presbyterian Church. Mary enjoyed entertaining, embroidery and antiquing. Her two trips to Czechoslovakia to experience her heritage left her with heartfelt memories.

Mary was preceded in death by her parents; her husband Selmer in 1989; her great-granddaughter Chalita E.R. Clifford; her sisters Evelyn and Adeline Empanger; and brothers Lumies and Joseph Empanger.