Robert W. Bruce, “Bob,” 92, of Omaha, Neb., former resident of Albert Lea, died Saturday, Sept. 22, 2012. Bob was born Aug. 19, 1920, in Rockford, Iowa. He graduated from Rockford High School in 1937, attended Hamilton School of Commerce, Mason City, Iowa, and Iowa State University from 1937 to 1941. He entered active duty during World War II as a second lieutenant and served in combat with the 660th Field Artillery Battalion in Germany. In 1945, he served as headquarters commandant and as assistant executive officer of the office of military government for Hesse, the second largest of the American occupied German states, charged with rebuilding after World War II.

He married Barbara Burns of Omaha, Neb., on Oct. 11, 1947, at the First Presbyterian Church in Albert Lea. Upon returning stateside from Germany in 1949, Bob and Barb made their home in Albert Lea. He began work as a life insurance agent. In 1953, he joined Peoples Savings & Loan, where he served as president until his retirement in 1986. 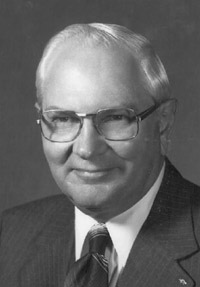 During those years, he was active in many local civic and community affairs. He served as director, president and lieutenant governor of Kiwanis; board member and past president of Jobs Inc.; member and past chairman of the advisory board of the Salvation Army; member of the American Legion, Osman Shrine Temple and Albert Lea Country Club. He was also on the board of the YMCA-YWCA, officer of the Chamber of Commerce and president of St. John’s Foundation.

He was active in the savings and loan industry on both the state and national levels. He was secretary, director and president of the Minnesota Savings League and director of the U.S. League of Savings & Loans, where he served on various committees, including the legislative committee. He was a director of the Federal Home Loan Bank of Des Moines, serving as the vice chairman. During this time he was a member of the State Personnel Board for five years, where he served as vice chairman.

Bob was active in the Army Reserves, and retired in 1972, holding the rank of lieutenant colonel. Bob and Barb retired to San Antonio, Texas, where they lived for 17 years. He was elected to the Windcrest City Council and served as vice chair of the Planning and Zoning Commission. He served as president of the Windcrest United Methodist Church Foundation and was a member of the Windcrest Golf Club.

A memorial service for Bob was held at the Lighthouse Chapel, Lighthouse Care Residences, Omaha, Neb., on Sept. 28, where Bob had been a resident for the past two years.