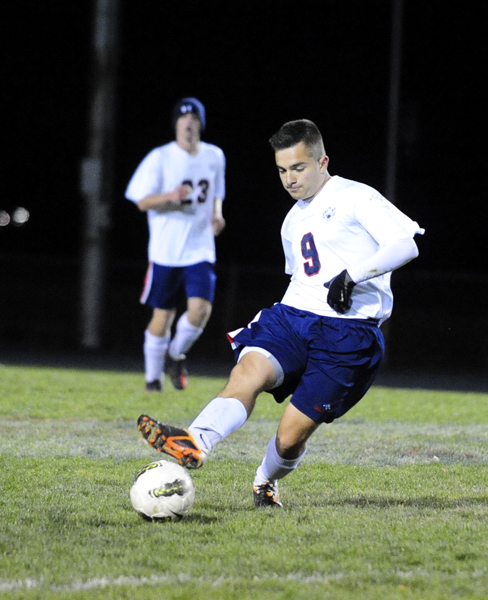 Soccer fans braving the cold 40 degree weather on Tuesday night got to see the Albert Lea boys’ soccer team leave its home field for the season with a bang.

The Tigers beat Kasson-Mantorville 2-1 after 20 minutes of overtime and a shoot-out.

The first four shots taken in the shoot-out by Tiger and KoMet players were good. The Tigers’ next shot flew over the goal putting them at risk for a loss.

In the Tigers’ favor, though, the KoMets also missed.

Albert Lea’s Tim Furland made the next goal and was followed by the KoMets’ Zak Lippert. Lippert missed the goal.

All the Tigers had to do was make it past Kasson-Mantorville’s goalie one more time and the victory was theirs.

On the Tigers’ seventh turn of the shoot-out, Cesar Herrera clenched the win.

“I watched it go in,” said Tigers coach Joe Squires. “It was textbook. He got up, made the decision and went for it. It was beautiful. He put the capital “W” on that win for us.”

Squires said it was like the team wanted to give the crowd another show before the season ended.

For Herrera it was undescribable.

To get to that point, the Tigers scored the first goal on the night with just under five minutes remaining in the first half. It was kicked in by Tyler Shaw.

The KoMets tied the game up in the second half with 27 minutes, 23 seconds remaining in the game and held on until the buzzer sounded.

“Kasson played us tough.They didn’t give in and they got that goal,” Squires said. “They held it longer than we wanted them to.”

With so many positives working for the Tigers, like ball movement, possession and outshooting their opponents 24-7, Squires said the only thing missing was being able to find the net.

“Tonight was just an unlucky night for us really,” Squires said. “We had everything except the one thing that really mattered, getting a goal.”

Squires credited the Tigers goalie Nate Hogstad for helping in the win.

“Nate came up big with a huge save to lead us to win in the penalty kicks,” Squires said.

“The game looks very comparable to Kasson tonight,” Squires said. “We’ll have to be able to stop their counter attacks and move the ball forward with control.”

The game is scheduled for 7 p.m.