Training for a lifetime 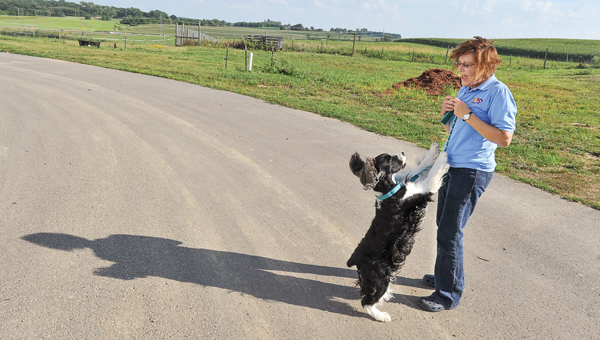 See more: Find this story and others like it in the latest edition of Southern Minnesota. Stop by the Tribune for your copy of the magazine.

Few things are as easy to forgive as unruly, obnoxious, misbehaved puppies. They’re so cute because they just don’t know any better. Soon, however, it’s time to get down to business and be a leader for your dogs. That’s where Tekla Viker comes in. 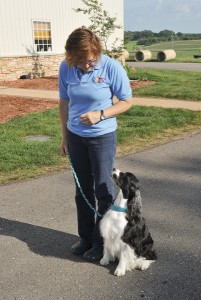 Dog trainer Tekla Viker works with her English springer spaniel Emma outside Leashes and Leads near Byron. Viker conducts obedience classes in both Austin and Albert Lea starting in the fall.

Viker works at Leashes and Leads — a 4-year-old business and training facility just west of Rochester on Highway 14. Viker, who is no dog training rookie, started training in 1985 with her first springer spaniel. From that point, she never stopped.

For a dog and its owner, training doesn’t end when the dog learns a trick or acts correctly. Training is lifelong. Furthermore, the training industry has changed, Viker said. Years ago, dog training didn’t start until dogs were 8 to 9 months old. Techniques were largely punishment based, Viker recalled. Now training starts from day one.

“It starts the minute they bring the dog home,” Viker said.

Viker warned that though training needs to be started early, it also needs to be approached carefully and correctly.

Undoubtedly, there are owners trying to pound rules into dogs’ heads by yelling, hitting and focusing on negative reinforcement. On the other hand, some owners overuse positive reinforcement by continuously rewarding their pooches with treats, toys and compliments as if they were speaking to babies. Viker stands somewhere in between, where much of the dog training industry has settled.

If that sounds discouraging, Viker says, it doesn’t have to be. Much of a dog’s behavior can be controlled by the simple “sit” command. It’s an easy command to teach and you can use it before feeding a dog, letting the dog go outside, playing with a toy and just about anywhere. To add to that, Viker recommends puppy classes and obedience training, a weekly staple where she works. 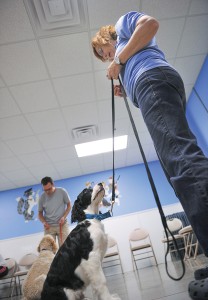 Tekla Viker works with her four-month-old English springer spaniel puppy Blake during a class at Leashes and Leads outside of Byron. Viker teaches obediance classes but also takes part in them saying she's never done learning.

“Those are the two you’ve got to start with,” she said.

Sure, puppy classes allow a lot of running, playing and mischief. But they also allow pups to learn proper behavior around other dogs. After a half-hour of goofing off, owners receive lectures about obedience training and tips for at home, the park and elsewhere. And training doesn’t end once a class session is complete.

“You can’t come to class for an hour a week and expect a trained dog,” Viker said.

It’s like learning a foreign language: Use it or lose it. That mentality and consistency shows dogs who is in charge. So even when owners have mature, well-trained dogs, they ought to continue to be as Viker is around her three, high-energy spaniels: a leader.

• A six-week puppy training course is held Tuesdays at 6 p.m.