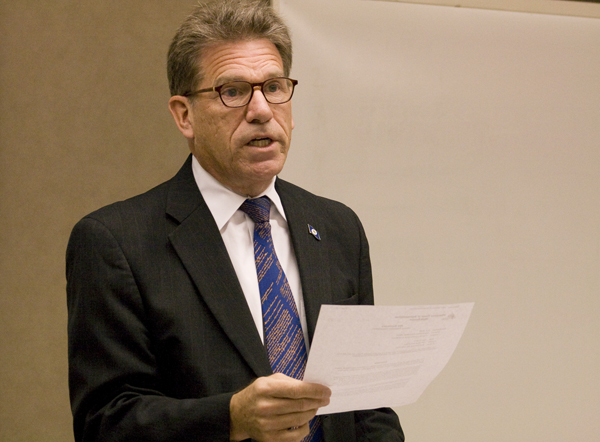 A forum with Minnesota Secretary of State Mark Ritchie set up to discuss the proposed voter ID amendment on the November ballot ended up being a clash of opinions.

Ritchie, who was invited to speak at the request of Freeborn County Auditor-Treasurer Dennis Distad, said he is worried about what costs would be triggered on the local level if the amendment is approved. He said there is a risk for unfunded mandates.

The amendment would require people to present plastic government-issued photo identification before receiving a ballot. The state would be required to issue ID at no charge to eligible voters who do not have the required identification.

A voter unable to present government-issued photo ID must be allowed to submit a provisional ballot, until the ID is verified.

Some in attendance questioned Ritchie’s intent to speak in Albert Lea, accusing him of speaking as an elected position in a role against the amendment instead of giving the pros and cons.

Resident Paul Overgaard said people need to have an ID to cash a check or do most anything anymore, and he asked how this would be any different.

Albert Lea lawyer Matt Benda asked how many people in Freeborn County do not currently have a plastic identification.

Ritchie said he did not know the breakdown.

Ritchie is a Democrat from Minneapolis, and Overgaard and Benda are local Republicans.

Ritchie said there are 84,000 people across the state who do not have the necessary ID to vote.

“Do you really want to go down a path and lock in plastic identification into your constitution?” he said.

He noted instead that he was in support of an electronic voter identification system, which he said would be easier and cheaper.

He also said he does not think people are out to create fraud.