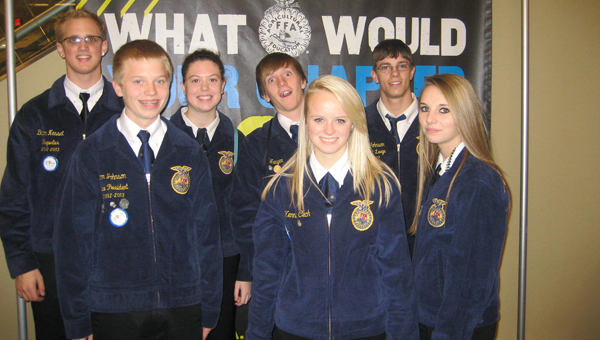 Pictured are the seven Glenville FFA members who attended the national convention. In front from left are Sam Johnson, McKenna Cech and Mady Wangen. Back row from left are Dalton Nesset, Meagan Nelsen, Spencer Wangen and Shawn Johnson. — Submitted 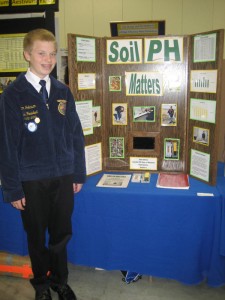 Sam Johnson poses for a photo with his project. — Submitted

On the way down to Indianapolis, the bus made a stop at Hardy’s Reindeer Ranch and Corn Maze Tour in North Rantoul, Ill. That same night, after the first session, the chapter enjoyed a concert by the Band Perry and the opener, Brantley Gilbert.

On Oct. 26, the Glenville FFA chapter volunteered their time and an abundance of effort to the FFA Rally to Fight Hunger, where the members packed bags of food for the less fortunate. Also, that day Sam Johnson, Glenville FFA member, competed in the National Agriscience Fair where he received a silver placing.