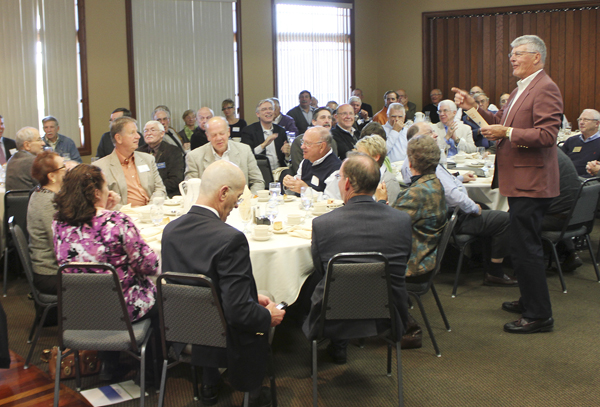 OWATONNA — An organization dedicated to assisting people start their own businesses now has a chapter in south central Minnesota.

Members of SCORE in the region had belonged to the Rochester-based Southeast Minnesota Chapter, but on Wednesday members from Albert Lea, Owatonna, Faribault, Mankato and Waseca gathered at the Owatonna Country Club to mark the beginning of the South Central Minnesota SCORE Chapter.

“It is the only new SCORE chapter in the country this year,” said Mick Jaquette, the secretary for the new chapter and retired Albert Lea businessman.

SCORE once stood for Service Corps of Retired Executives, but now goes by the slogan, “Counselors to America’s Small Business.” Basically, the nonprofit organization aims to put people with experience in small business in touch with people in emerging small businesses.

At the gathering, they heard from Southern Minnesota Initiative Foundation CEO Tim Penny.

“Our belief is these budding entrepreneurs are the centerpiece of the economy,” he said.

The new SCORE chapter will have its office at the SMIF workplace, 525 Florence Ave., Owatonna.

Penny pointed out how every large business, such as Mayo Clinic or Hormel Foods, started as a small business with humble beginnings. He also noted the excitement in the room.

Indeed there was, as bankers and some of the biggest supporters of economic development from around the region were eager to see each other and talk shop, as well as to network with new faces.

The group met in the morning to discuss marketing plans, then after lunch they set about chartering the chapter, installing officers and recognizing volunteers.

One reason they were able to get a new chapter going so swiftly, Jacquette said, was they had so many volunteers ready to serve as mentors. The program listed 44.

In addition to Penny, they also heard from Steve Records, SCORE’s vice president for field operations, from Ryan Penticoff with Sam’s Clubs and from Andy Amoroso, deputy district director for the Minnesota Small Business Administration.