The memorial service for Edward W. Possin of Geneva will be 11 a.m.  Saturday at St. Peter Evangelical Lutheran Church, New Richland. The Rev. Scott Williams will officiate. Interment will be in St. Peter’s Cemetery. Visitation will be one hour before service. Military honors will be accorded. 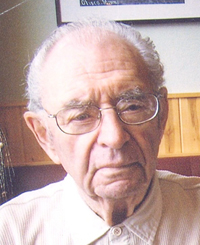 Edward was born July 7, 1926, in Waseca County to Gustav and Alma (Bauman) Possin. He married Fern P. Schultz on Nov. 6, 1949, at St. John’s Lutheran Church, Owatonna. Edward was a member of the St. Peter’s Evangelical Lutheran Church of New Richland. He worked as a mechanic and did auto body work for Krejci Motors, Blooming Prairie. He served in the U.S. Army from 1944 to 1946 and belonged to the American Legion and VFW. He also belonged to the DAV and the National Rifle Association. Edward enjoyed reading magazines, collecting miniature cars and wood working.

Edward is preceded in death by his parents: Gustav and Alma Possin; and a sister who died at age of 4.