Evelyn M. Schneider, 100, of Wells, died Sunday, Nov. 18, 2012, at the Shepherd’s Inn, Wells. A celebration of Evelyn’s life will be held Tuesday, Nov. 20, 2012, at 11 a.m. at the United Methodist Church in Wells. Visitation will be held one hour prior to the service at the church on Tuesday. The Rev. Paul Woolverton will officiate and interment will be in Rice Lake Cemetery at a later date. Please see www.brussheitner.com to leave online condolences. Bruss-Heitner Funeral Home in Wells is in charge of arrangements. 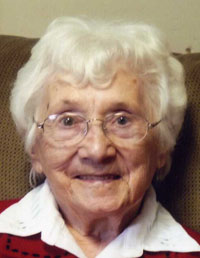 Evelyn Margaret Courrier was born on Sept. 28, 1912, in Faribault County to Herman and Helena (Wegner) Courrier. She graduated from Wells High School. She was united in marriage to John F. Schneider at the Rice Lake Church in 1933. John and Evelyn had three sons, Dean, Larry and Glenn. They farmed for many years, then in 1959 John and Evelyn moved to Albert Lea. Evelyn worked in the Skyline Mall at the Ben Franklin Store and at Three Sisters. Evelyn moved back to Wells in 1991. She enjoyed her family, loved to read, do rubber stamping and work with flowers. For the past eight years, the Shepherd’s Inn has been her home and family. She will be missed by all.

She was preceded in death by her parents, her husband, John, in 1988; one son, Dean in 1981; four siblings Mayme Miller, Alma Miller, Harry Courrier and Marvin Courrier. Memorials are preferred to Mayo Clinic hospice or donor’s choice.