By Jenna Vos and Kendra Olson

The smell of apples and cinnamon fills the air. The soft and tender dough is being rolled flat. Itchy hairnets are irritating our heads. What is this? The apple pie fundraiser! 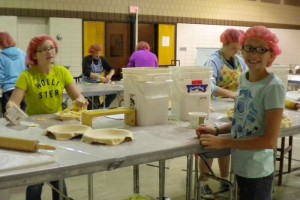 Students work to make apple pies during a fundraiser at Hollandale Christian School on Oct. 6. -- Submitted

The Hollandale Christian School Pie Fundraiser was held at the school on Oct. 6. The apple peelers began at 7 a.m. The rest of the assembly began at 8 a.m. The goal was to make 600 pies, and it was a busy day for everyone.

The dough had been made on Friday by our teacher and some other mothers and women. All of the dough weighed about 518 pounds. It took a while to make it all!

It took many people with several jobs to make this fundraiser possible. Some of the jobs needed included apple peelers, dough rollers, fillers, fluters, baggers, taking out and refilling buckets, and there were also some kids who helped carry pies. One of the jobs was filling the pies with deliciousness. Students filled the bottom pie crust with loads of apples and mounds of cinnamon and sugar. It was hard not to take a bite!

With only 30 adults and 10 children 592 pies were made in seven hours. And $2,900 went toward tuition of the 21 families that participated. The rest of the money raised went in the general fund.

Mrs. Gerry’s donated buckets, and the school is very appreciative. The buckets held all the dough, apple slices, cinnamon and sugar.

Ventura Foods donated 200 pounds of lard, which was very kind. It helped keep some of the expenses low.

North American Mat Company donated stress free mats for those hours of standing. The mats helped relieve the pain and stress of working.

The pie fundraiser was a great time of fellowship and a fun way to help Hollandale Christian School.