‘I would gladly do it again’ 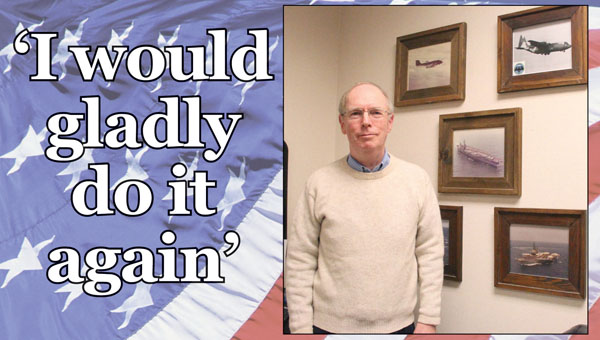 Veteran Mike Miller has photos of ships and airplanes in his office at the Minnesota Workforce Development Center in Albert Lea. Miller was in the Air Force and Navy before retiring in 1990. -- Kelli Lageson/Albert Lea Tribune

Being in the military provided countless opportunities for one Albert Lea man.

Mike Miller and his wife, Althea, have lived in Albert Lea for the last 20 years, after having lived at various places all over the globe while Mike was in the Navy. The couple loves to travel and enjoyed seeing many different countries.

“I’ve been in 36 countries and lived in four overseas,” Miller said.

He was stationed for long periods of time in Germany and the Philippines, among other places. From there he was deployed to other locations.

“It’s nice that I got to see lots of things that lots of people don’t see,” Miller said.

In 1966, while the Vietnam War was happening, Miller was attending college in Illinois and decided he wanted to volunteer for the U.S. Air Force. He spent four years working in communications and was deployed to Vietnam and Thailand. Miller remembers flying on combat missions over the Ho Chi Min Trail.

“I ended up as a radio repairman,” Miller said.

After his four years were up, Miller ended his Air Force stint as a staff sergeant. He returned to college and graduated from Illinois State University with a bachelor’s degree with majors in physics and math. Then he didn’t know what to do, but he knew he didn’t want to stick around the same Chicago suburb. So he joined the Navy in 1973 and went into officer training. By the time he finished his Navy career in 1990, he was a lieutenant commander.

“That took some time,” Miller said.

Miller then attended naval postgraduate school in California where he received his master’s degree in national security affairs. All his training and education led him to some interesting assignments in Spain, the Philippines and Germany.

“I would brief crews and give training on enemy weapons,” Miller said.

While in the Philippines, Miller was the deputy intelligence officer on the staff for the admiral who commanded all carrier battle groups in the western Pacific and Indian oceans. He was deployed most of the time on the USS Midway and USS Carl Vinson.

He next headed to Vaihingen, Germany, a suburb of Stuttgart. He remembers the location fondly and said it was probably his favorite place to live overseas. It was centrally located in Europe, which made traveling to other countries easy. He also spoke some German and found the people to be friendly.

In Germany he was on the staff of the general who commanded all the American military forces in Europe and much of Africa. Because he was involved in intelligence, he met some high-profile people and helped with important missions.

“When we did the airstrike against Libya in 1986, I was on the team who planned that,” Miller said.

He also got to meet President George H.W. Bush, who was a Navy man himself. Miller said Bush saw him standing in his Navy uniform with a few Air Force men, and Bush walked up to Miller to talk before visiting with the others. Miller also had the opportunity to make a presentation to the then-CIA Director William H. Webster. Miller said in 1990 he had to decide whether to try to move up or leave the military.

“I wasn’t heading to be an admiral, so I retired,” Miller said.

But he wouldn’t change his military career and said he enjoyed all the opportunities.

“I would gladly do it again,” Miller said.

He, his wife, and their two children, Hillary, now 23, and Teague, now 22, moved to Albert Lea where he became the administrative manager at GameTec from 1992 to 1997. He said the printing company was looking for someone with security clearance because it dealt with the state lottery. He also worked in human resources at that job, which helped him in his transition to human resources director at St. John’s Lutheran Home.

“I like helping people,” Miller said. “We can help them come back to school or with other programs that are out there.”

Miller is also a member of the Noon Kiwanis Club in Albert Lea. Now that their children are older, Miller said he and his wife would like to travel again.

“We’re hoping to start again because we haven’t traveled much lately,” Miller said.