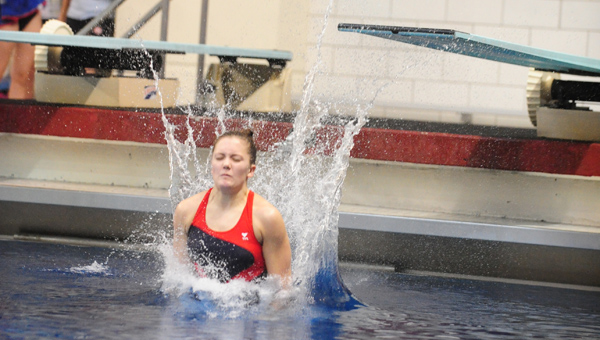 Karli Kriewall slides into the water on her last dive of her high school career. She took second place in the Class A state tournament. --Brandi Hagen/Albert Lea Tribune

MINNEAPOLIS – She’s ready to move on to the next level in her diving career, but first she had to finish her third and final trip to the Minnesota High School League state swimming and diving competition.

Albert Lea senior Karli Kriewall was the only upperclassman who made it to the state tournament for the Tigers and she came out with a second-place finish in the Class A 1-meter diving event.

“It’s awesome,” Kriewall said. “I’m kind of glad it’s over, though. It’s a big weight off my shoulders.”

Kriewall placed second behind the 2011 defending champion Bailey DuPay, a sophomore from Northfield.

“I knew Bailey would be a hard opponent to beat,” Kriewall said. “She just naturally has it.”

After the five rounds of preliminary dives Thursday Kriewall was 29.45 points off of DuPay. With her score of 161.45, Kriewall was in second place when the list of 32 divers was cut to 20. Immediately after the calculations were done, the top 20 divers competed in the semi-finals.

“I kind of got close to her and gave her a little run for her money,” Kriewall said.

In her three semi-final dives Kriewall cut the difference between her and DuPay to 19.6 points.

Maintaining her second place spot, Kriewall had a total of 260.15 points going into the Saturday finals.

“I was anxious, but for the most part I was ready,” she said.

Kriewall had three of her best dives saved for the finals, with the very last one being her favorite.

“Right before the dive, I was like ‘this is my last dive of my high school career and I’m done,'” Kriewall said. “It’s my favorite dive and I think I was so amped up about it that I went over a little bit too much but I was fine with it.”

“Second is fine,” Kriewall said. “I had my best meet of the season.”

The second-place finish was an improvement for Kriewall. As a junior she placed third in the competition and as a sophomore placed fifth.

“It was awesome,” Kriewall said about moving up on the podium. “I went up on the steps and I was like ‘Gosh this is higher than last year, this is kind of sweet.’ Getting the medal made it all the more realistic.”

Kriewall will take the week off, but will return to her club team at the University of Minnesota next week to start preparing for her career at Boise State University, the Division I school that she signed to last week.

Check back for a gallery.