Kriewall in 2nd going into finals 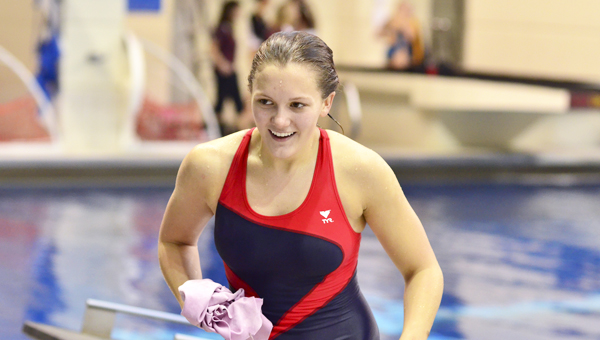 MINNEAPOLIS – Wednesday she signed to Boise State University, a Division I school for diving.

Thursday she completed eight dives during the preliminary round of the Minnesota State High School League state diving tournament.

Saturday, she’ll begin her final state trip of her high school career in second place, just 19.6 points behind the leader, after scoring 260.15 points.

Albert Lea senior Karli Kriewall is in the midst of her third trip to state swimming and diving tournament and she’s feeling secure in her spot.

Last year going into the championship round Kriewall was in 10th place. She ended up in third.

This year, she’s already improved and the finals are yet to come. 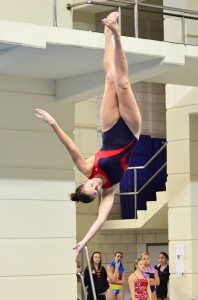 “It’s like a weight off my shoulder,” Kriewall said as she shook with nerves after the meet. “I’m so glad today is over. I’m in second and I have nothing to worry about. It’s awesome, really awesome.”

The meet started with 32 divers and after five rounds it was narrowed down to 20.

Kriewall was in second both times. The first time she was 29.85 points behind sophomore Bailey Dupay of Northfield, the same diver who won the Section 1A tournament last week.

After the cut, Kriewall maintained what she was already working on. With three more dives added to the score, she cut the difference between her and Dupay by 10.25 points.

“It’s crazy,” Kriewall said. “I’ve never got this close to her. I don’t know if I’ll be able to sleep tonight.”

The key to Kriewall’s success so far is taking each dive one at a time and completing them just as she’s done in practice.

“I tell myself it’s the last one I’m going to do for a bit so I need to do it well,” she said. “They’ve been solid and that’s what I’ve needed to do.”

She also said she’s consciously thinking about her attitude.

“I stay positive and make the judges think that even though in my head I’m nervous that I’m not at all,” Kriewall said.

Watching from the sidelines, Kriewall’s diving coach Jill Johnson was all smiles.

“What a great day,” Johnson said. “Karli dove so well. She put together a solid round of dives.”

Johnson said one of the highlights of Kriewall’s performance on Thursday was her reverse and a half.

“We’ve worked on that dive all year and she nailed it,” Johnson said.

As Kriewall performed each dive, Johnson said she was probably more nervous than her diver.

“In my head I went through what she was supposed to do on each dive and I just watched her do it,” Johnson said. “She came through on every one.”

The diving competition Saturday will be mixed in with the rest of the swimming events which are scheduled to begin at noon.

Kriewall and the other 15 divers will each complete three more dives.

Watch the Tribune’s website for a gallery from Kriewall’s performance.