The funeral service for Lila Annie Linda Ellingson will be held at 10 a.m. on Saturday at First Lutheran Church in Glenville. The Rev. James Rushton will officiate. Interment will be in Hillcrest Cemetery. Visitation is from 4:30 to 7 p.m. Friday at Bonnerup Funeral Service in Albert Lea, as well as one hour prior to the service at church.

Lila Ellingson passed away on Tuesday, Nov. 27, 2012, at Good Samaritan Society in Albert Lea, where she was for a short time after a hospital stay. She was 93 years old. 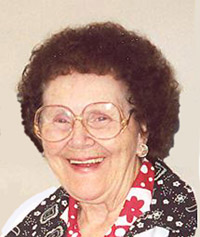 Lila was born on Nov. 8, 1919, in Shell Rock Township. The daughter of Ervin and Emma (Fevold) Lau, she grew up on a farm near Gordonsville and attended Northwood High School where she received her norm teaching degree. On Sept. 21, 1940, she was united in marriage to Kenneth Ellingson. The two were together for 56 years and raised four children. After marriage the family moved from Gordonsville to the family farm outside of town, before moving to Northwood. After five years, the family moved back to the farm outside of Gordonsville. After Kenneth’s death in 1996, Lila settled in Glenville. On Nov. 11, 2000, she married Derwin Dahl. She was a member of the First Lutheran Church in Northwood, where she taught Sunday school for 25 years and was active in ladies aid and church circle. After moving, she was an associate member of First Lutheran Church in Glenville, where she was an active church and circle member.

Lila was a social butterfly, participating in organizations with special friends of the State Line Stinkers Birthday Club, Riverside Couples Club, Senior Center of Glenville, Camper’s Club, The Eagles and the REC Travel Club. She loved dancing, cooking, entertaining, shopping, camping, fishing and traveling to Arizona in the winter months in her motor home, which she proudly drove until age 90.

Lila was a wonderful, spirited, loving mother and grandmother who was very helpful and caring woman. She will be deeply missed by her family and special friends, Ruth Thompson, Ruth Schilling and Arlyn Anderson. Blessed be her memory.