MINNEAPOLIS (AP) — The Target Center crowd stood and watched in disbelief as Kevin Love was introduced in the starting lineup, at least a week ahead of schedule from a broken right hand that had kept him out for the first nine games of the season.

The only problem was his Minnesota Timberwolves teammates spent the rest of the night standing and watching Love as well. 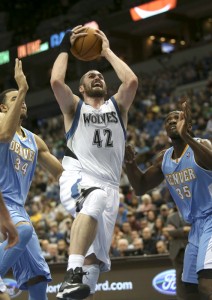 The Minnesota Timberwolves' Kevin Love splits the Denver Nuggets' JaVale McGee, left, and Kenneth Faried, right, during first-half action at Target Center in Minneapolis, Minnesota, on Wednesday, November 21, 2012. Love made a surprise return to the lineup after being out all season with a broken hand. --

Love had 34 points and 14 rebounds, helping the Wolves take a 17-point lead in the first half. But he didn’t get a whole lot of help in his first game in nearly five weeks. Nikola Pekovic had 10 points and seven rebounds, and J.J. Barea was the only other Wolves player in double figures with 12 points.

“You’ve got to be able to go to other players rather than just him,” coach Rick Adelman said.

Danilo Gallinari scored 19 points for the Nuggets, who withstood a furious start by a Timberwolves team buoyed by the return of their All-Star power forward.

Ty Lawson had 18 points and nine assists, and Kenneth Faried had 14 rebounds for the Nuggets, who overcame 20 turnovers. After a sluggish start to the season, the Nuggets (6-6) have picked up two straight quality road wins against Memphis and Minnesota.

“Kevin Love’s an All-Star player, but it’s a 48-minute game and thank God we hung around,” Nuggets coach George Karl said. “The balance at both ends of the court was probably the best we’ve played all year.”

Love broke his right hand Oct. 18, about two weeks before the start of the regular season, and the team estimated a recovery time of six to eight weeks. But he quietly rejoined the team at practice during a four-day break between games, and the Wolves did their best to keep a lid on his return for as long as possible.

Adelman even dodged a question about Love’s progress about 75 minutes before the game, but word leaked out a few minutes later that Love was back in the starting lineup.

“I didn’t want to make a big deal about it,” Love said. “I told my teammates, and they didn’t really believe me. Once they saw a jersey in my locker, they believed it was true.”

Love said he called his father on Wednesday to tell him he was playing, then asked if he had any advice.

Love scored 16 points on 7-for-12 shooting in the first quarter, an incredibly fluid performance considering his long layoff. Barea and Pekovic returned from injuries as well, and the Wolves led by 17 points in the first half, but Iguodala, Love’s Olympic teammate, helped Denver come roaring back in the third quarter.

Still, Love said he didn’t feel like his normal self over nearly 35 minutes. He missed six free throws and was just 2 for 9 from 3-point range and was constantly flexing his hand to work out some of the residual pain.

“I haven’t even practiced, so I just kind of threw myself into the game hoping something good was going to happen,” Love said. “I missed some free throws, missed some 3s that I don’t usually miss. A lot of those could have saved us the game.”

Iguodala hit three 3-pointers and then unleashing a spin move in transition and a dunk over two Timberwolves to tie the game at 67. Lawson added another from long range and Faried threw down a dunk that gave the Nuggets a 92-87 lead with 2:41 to play, and Denver was able to hold on.

Andre Miller scored all 11 of his points in the fourth quarter for Denver.