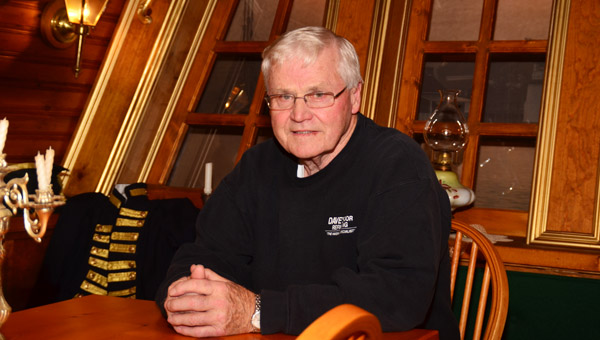 Mark Langrud of Manchester sits in his captain’s cabin that he started constructing in his basement back in 1980. -- Buck Monson/Albert Lea Tribune

MANCHESTER — In 1980, Mark Langrud of Manchester started building his own version of a man cave. There is no TV. There is no fancy chair. There are no beer signs hanging on the wall. It does, however, have everything that Langrud needs to find a little peace and quiet. 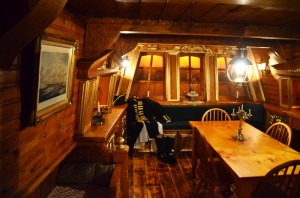 A look into Mark Langrud's version of a man cave, his 1750s inspired captain's cabin located in the basement of his Manchester home. -- Buck Monson/Albert Lea Tribune

Langrud’s man cave is a room that he has turned into a captain’s cabin from a ship called the HMS Bounty, which was an English frigate. The room has the feel of being out to sea, complete with a sound system that plays the sounds of the sea.

“I had a model of the HMS Bounty, and that’s kind of how I got everything going. I used it for the angle of the mast and then it just kind of took off from there,” Langrud said. “I didn’t have any plans to speak of.” 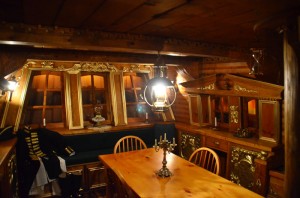 A look at the back of the Captain's Cabin compete with the 1750s captains uniform. -- Buck Monson/Albert Lea Tribune

He joined the United States Navy in 1958 and served until 1962. He started out at the Great Lakes Naval Training Center and then headed to Norfolk for schooling. From there he went to the USS Sperry, a submarine tender in San Diego. There he worked on submarines.

“I joined the Navy to see the world,” Langrud said.

Because he was stuck working on submarines, he never got out to sea. There was a heavy cruiser that came into port in Los Angeles, and Langrud put in for a transfer. 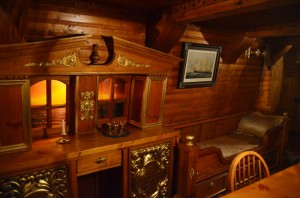 A view of one of the two bunks that are built in to the wall. -- Buck Monson/Albert Lea Tribune

“Just a few weeks later, we were headed for Japan,” Langrud said. “We saw Hawaii, the Philippines, Japan and Okinawa. We also spent a lot of time helping test the Polaris missile.”

After the Navy, Langrud started working as a UPS delivery driver in 1965. Langrud spent 30 years working with UPS locally and retired in 1995.

Langrud would work late at UPS and sometimes get home around 8:30 p.m. He would then go down to his basement and work on his project until midnight or so. He would do this most nights, but when he just didn’t feel like things were going right, he would take a break or stop and continue the next day.

Langrud has been working on the room for all these years and is still adding things to this day. The room is 12-by-16 feet and contains a center table, a bunk on each side, a bench, windows on each side and a window looking out the back at a beautiful mural painting. 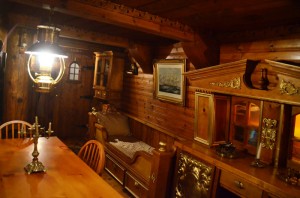 A view of one of the two bunks built into the wall. -- Buck Monson/Albert Lea Tribune

All work on this project has been done by hand. Langrud has done all the work himself other than the help he got from his son, David.

“David stained everything in here,” Langrud said. “It probably took him a couple weeks to get it done.”

Langrud’s room has seen quite a few guests. Around 20 years ago, they had a Youth for Christ tour come through and tour the room along with some other attractions in the area.

“I bet there was around 400 people,” Langrud said.

Not many people really know about his secret room, and he is OK with that.

“Basically, it’s my room. I do whatever I want to down here, Langrud said. “I’m going to start making model plank-on-plank wood ships, and I’m going to do that right here in this room.”

Langrud and his wife, Judy, will celebrate their 50th anniversary this December, and, of course, they plan on being by the water down in Florida to celebrate.

It’s not rare to catch Langrud napping in one of the bunks.