Tales of the rails 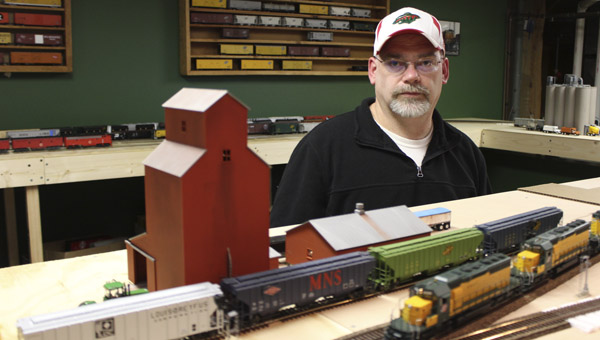 Mike Christenson stands in the middle of the track plan he is working on in his basement at his home on Brookside Circle in Albert Lea. -- Tim Engstrom/Albert Lea Tribune

Nothing in the model train set in his basement is meant to look like it happened after 1981.

Mike Christenson, 44, is building a train set that aims to be somewhat like Albert Lea from his youth. He has been into model trains for as long as he can remember because his father also had trains. However, Christenson has been into them seriously for about 25 years. 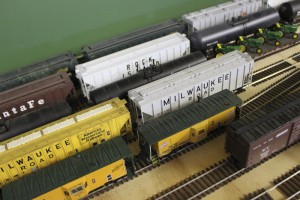 This rail yard along the wall at Mike Christenson's house is reflective of what he recalls the Chicago & North Western rail yard near Streater Inc. in Albert Lea used to look like. -- Tim Engstrom/Albert Lea Tribune

The track plan in his basement is his fourth one and the third one in his house on Brookside Circle. It is the first one he is designing.

“I got kind of bored with the old track plan and wanted to see something more,” Christenson said.

He is a fan of the Chicago & North Western Railway because that’s what ran through Albert Lea in his youth on tracks the Union Pacific Railroad now owns.

What is in his basement is just the beginning. The HO-gauge setup doesn’t have grass or many buildings yet, but he said he plans to make the track go through industrial areas, with a farm in one corner. For instance, a rail yard along the well is meant to he reminiscent of the rail yard that once existed next to Streater Inc. in Albert Lea.

“It’s a work in progress. This is just the beginning,” he said.

For four years Christenson worked as a switch foreman in Wells for the Iowa, Chicago & Eastern and Dakota, Minnesota and Eastern railroads. The job required a lot of travel and long hours, but those years expanded his knowledge of railroads, which he puts into his models.

Nowadays, he works at SAR Inc., a custom machining and metal fabrication contractor on Airport Road. He has two daughters at home and one grown daughter. They are Kayla, 10, Allison, 13, and Bre, 21. His wife’s name is Sandy. 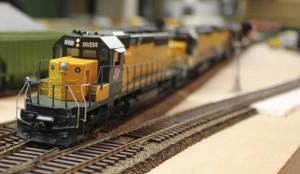 Christenson said he likes having other model railroad enthusiasts over to run their trains. Many tracks allow one train per track. He has his set up with what’s called “digital command control,” and it allows multiple trains on connecting tracks. This creates a situation where the models could collide and, he admitted, have collided. The operator has to speed up and slow down trains to make sure they run properly and safely.

Other enthusiasts come to Christenson to have him install sound in their engines or fix the trains. He also knows how to apply decals and customize trains. He is part of the North Iowa Model Railroad Club, which has a train on display at Southbridge Mall in Mason City.

Many enthusiasts like to sell collectibles or pieces they no longer use at train shows, like the Albert Lea Area Model Railroad Show & Swap Meet this weekend at Northbridge Mall. Christenson plans to be there with a table.

Some collectors will sell models, but some will set up their trains, something children always enjoy watching.

Christenson said he likes model trains in part because they can be used. He used to collect model NASCAR cars, but he stopped because they mainly set on a shelf.

He tried to get his daughters into trains, and for a time they liked Thomas the Tank Engine. He has nephews, though, who enjoy coming over to watch his trains. They know not to touch.