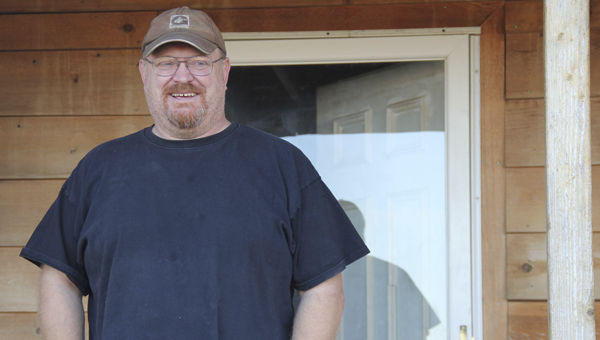 William Wagner smiles as he watches his dogs Monday while standing on the front porch of his home near Geneva. He was the Independence Party candidate in the House District 27A race. -- Tim Engstrom/Albert Lea Tribune

GENEVA — The candidate for the Independence Party in House District 27A surprised both candidates in the mainstream by garnering nearly 8 percent of the votes.

Murray told Minnesota Public Radio that he believed Wagner was a factor in swinging the election. He also has told the Albert Lea Tribune the same thing, but added that the large amount of spending on attack advertising in the race was another factor, one that could have prompted some people to seek the third-party choice.

Wagner agrees he changed the outcome.

“I don’t think Murray would have lost if it hadn’t been for me,” he said.

Wagner, 44, resides on a 12-acre hobby farm a mile west of Geneva at the intersection of Freeborn County Road 35 and Interstate 35 with his girlfriend, three dogs, 20 goats and a cow. He makes his living two days a week as a delivery driver for Hope Creamery, widely known for its Hope Butter product, and as a landlord. 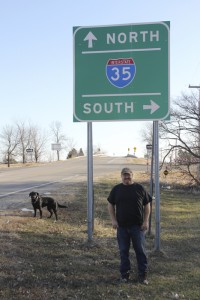 William Wagner, who ran for state representative as the Independence Party candidate, stands beside a large Interstate 35 sign that graces his front yard along Freeborn County Road 35 a mile west of Geneva.

It wasn’t his first attempt at the House District 27A seat, either. He ran as a DFLer against DFL incumbent Robin Brown in 2008, but he lost in the primary election. Brown went on to defeat Republican Erik Larsen.

Wagner didn’t run in 2010 because of injuries he suffered when a tree at his property fell on him. He was pinned with his big toe in his face. He couldn’t walk for two years and had to recover from a broken back, leg and arms. He tore the sciatic nerve in his right leg, and that leg feels dead to him still. He doesn’t like going to doctors, but he goes because he likes walking much better than getting around in a wheelchair.

Before his encounter with the tree, Wagner ran a machine shop on his farm. He deals with pain every day. The injury put him out of work and made it hard to find work until he got the Hope Creamery job in October.

He was going to seek the DFL nomination this time around, but when he learned the DFL district convention was going to endorse Savick, a former Wells mayor, he dropped his nomination bid and secured a nomination from the Independence Party, the third-largest political party in the state.

Carleton College political science professor Steven Schier said the Independence Party is running more candidates in outstate races, rather than just high-profile statewide seats. He told MPR they’re adjusting to fit the politics of the state and bucking their reputation as a paler blue version of the DFL.

Independence Party Chairman Mark Jenkins said he knows the party can be a spoiler in elections, but the result is people are learning more about the gap between the Democrats and Republicans, even on local issues. Their hope is this leads to better results in statewide races.

Mark Meyer of Lake Crystal is the Independence Party chairman for the 1st Congressional District. He confirmed that the party is looking to get more candidates in Greater Minnesota races and said he was surprised at the 8 percent Wagner garnered without hardly campaigning.

He said he wishes he had been able to provide more support for Wagner, too, but it was his first election cycle as the district chairman and he will know more the next time around.

“It was a learning experience for both of us,” Meyer said.

It irks him when big companies pay low tax rates while politicians push more of the burden of government onto the middle class. He said the cutting of the homestead tax credit hurt the Republicans in the general election.

“The rich get richer, and the poor get poorer,” Wagner said.

He said he is thankful to the people who voted for him, even though he didn’t run a high-profile campaign. He skipped a debate to care for his father, who is suffering from dementia, and Wagner didn’t get his signs out until two weeks before the election. He didn’t do much door knocking, either.

“If I had been able to get out and hit the pavement more, I think I would’ve had a lot better turnout,” he said.

DFL candidates often say the Independence Party steals votes from Democrats, but he and others looking at the 27A race feel he took more votes away from the Republican Party than the DFL Party.

But that’s the view from after the election. Before the election, the Democrats were worried about his candidacy. Wagner said Savick asked him to drop out of the race. He declined.

Now he is considering whether to make another run for District 27A representative in 2014 or shoot for a spot on the Freeborn County Board of Commissioners in four years. He is a former member of the New Market City Council and a former member of that city’s planning and zoning commission.

Wagner moved to Freeborn County in 2006 with his life partner Ginna Soltvedt. He made his living at the time buying and selling property, and at the time tried to get his sister to buy the one at I-35 and County Road 35 near Geneva. She declined, but he liked it so much that he bought it and decided to move there.

Wagner grew up on a farm in the New Market area and was part of the New Prague FFA chapter before enrolling in Lakeville in the middle of his junior year when his parents moved off their farm. He graduated from Lakeville Senior High in 1986.

In his free time, he enjoys taking care of the animals at his farm and going to livestock auctions in places such as Jackson and Zumbroto, or at county fairs. He also manages the homes he rents out, including ones in Albert Lea. He also likes sports and roots for the Minnesota Vikings and Minnesota Golden Gophers football teams.