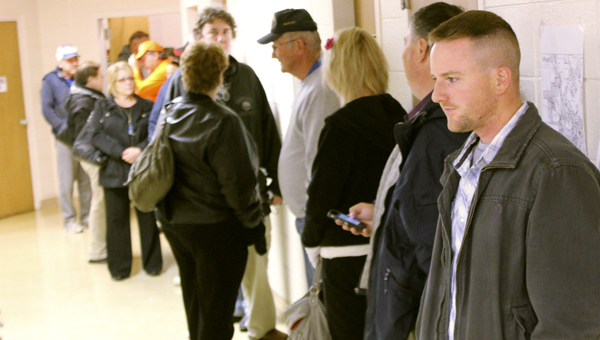 David Enser of Pine Hill Drive stands at the front of the line this morning at the United Methodist Church, where voters in Albert Lea’s Ward 3 vote today. -- Tim Engstrom/Albert Lea Tribune

Freeborn County voters took to the polls early this morning as light rain fell on the area.

Facing questions on the local, state and national level, residents appeared energized and ready to cast their ballots. 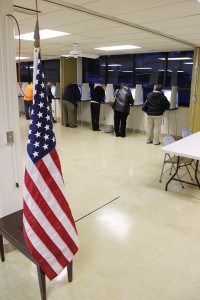 Albert Lea Ward 3 voters fill out their ballots this morning at the United Methodist Church. A U.S. flag stands near the voting booths.

“It’s my right to vote,” said one voter, Lisa Haney, who arrived at the United Methodist Church shortly after 7 a.m. to vote before heading off to work.

At the church, the Albert Lea Ward 3 polling place, 38 people stood in line waiting for the polls to open.

David Enser of Pine Hill Drive was the first in line. He said he was early because he needed to get to work on time and was happy to cast his ballot.

He said today is an important day.

“We’ll see what is going to happen to the future of America,” Enser said.

Minnesota opened polls across the state to welcome waiting voters.

Light drizzle was falling in the eastern part of the state, but was moving out and a dry day was forecast.

Secretary of State Mark Ritchie has predicted voter turnout approaching 80 percent. That would be about 3 million Minnesotans.

At Prince of Peace Lutheran Church in Roseville, the church’s large parking lot was full shortly before voting began at 7 a.m. and dozens of people stood in the mist waiting to get in. 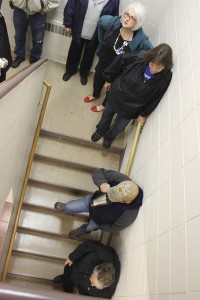 The line for Albert Lea Ward 3 voters just before 7 a.m. today wrapped around the corner and up the stairs. Thirty-eight were in line at the moment the polling place opened for voting.

He said he voted for Republican Mitt Romney for president “not because I think he’s the best, but I think he’s better than what we have.”

Delano described himself as a moderate who doesn’t vote along party lines. He said he voted for incumbent Albert Lea Mayor Vern Rasmussen and Albert Lea Ward 3 Councilor Ellen Kehr.

Chuck Zoller said he voted for Kehr’s challenger, former Ward 3 Councilor George Marin, who helped him out with a problem when he was previously in office before Kehr.

“He did a really good job when he was in there,” Zoller said. “He’s very receptive.”

Zoller said he voted Republican for president “because it’s the right thing to do.”

Freeborn County Auditor-Treasurer Dennis Distad said he is anticipating an about 87 percent voter turnout, which is close to what the county has had in previous years for a presidential election.

Elections were being held for the mayor seat and Wards 1, 3 and 5 within Albert Lea, in addition to a question about whether to extend the mayoral terms from two years to four years.