Ashley Louise Fuller and Matthew Joe Stahl were united in marriage Oct. 26, 2012, in an outdoor, double-ring ceremony near Alden, performed by the Rev. Joel Vano. 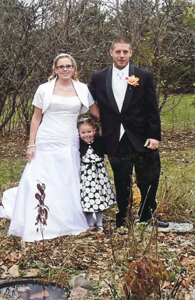 A Halloween-themed reception followed with cake cutting and music by Craig Lestrud at Brian and Barbara’s home.

The groom works at Hormel in Austin, and the couple are making their home in Albert Lea.