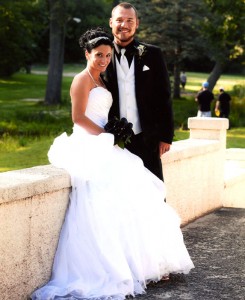 Flower girl was Alexis Nesse, niece of the bride, daughter of Nick Nesse and Malissa Brigston, of Albert Lea.

Personal attendant was Cassie Nelson, friend of the bride, of Lake Mills.

Ring bearer was Lincoln Peters, second cousin of the bride, son of Ray and Kara Peters, of Owatonna.

Ushers were Robert Carroll, cousin of the bride, of Rochester, and Josh Schipper, friend of the groom, of Albert Lea.

Bridget is a 2006 graduate of Albert Lea High School and a 2008 graduate of the Minnesota School of Business with a degree to be a veterinary technician. She is employed as a customer service respresentative at Wells Federal Bank.

Jerrid is a 2004 graduate of Dakota Collegiate, Winnipeg, Canada, and a 2009 graduate of Hennepin Tech with an emergency medical technician certificate. He is employed with Schipp’s Pro Power Wash.