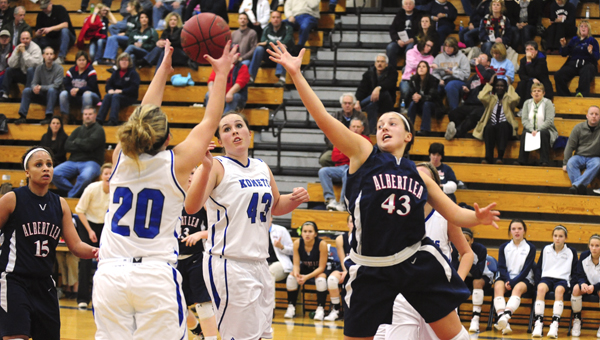 Megan Kortan reaches for a rebound as it lands in the hands of a Kasson-Mantorville player Saturday in Albert Lea. --Brandi Hagen/Albert Lea Tribune

The Albert Lea girls’ basketball team has already won half as many games as it did in total last year and they are only four games in.

The Tigers defeated Kasson-Mantorville on Saturday 69-62. It was a huge improvement from last year’s 93-48 loss.

“I think it was an all around team effort,” Tigers’ first-year head coach Lindsey Hugstad-Vaa said. 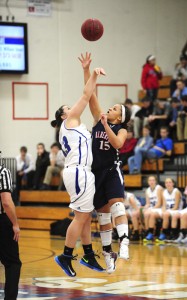 The team made a show with its passing. Almost every shot had more than one girl touching the ball before a basket was made.

“We were trying to be patient and stall,” Hugstad-Vaa said. “We don’t need to score when we’re ahead, we wanted to make them come out, play defense and foul us.”

The team totaled 18 assists on the night.

“We’re doing a much better job being patient than earlier in the year when we probably would have tried to just shoot right away and give them an opportunity to score.”

The KoMets gave the Tigers 29 free throw attempts, but the Tigers gave their opponents 41 attempts.

At halftime the Tigers trailed 38-35. With less than five minutes remaining in the game Albert Lea tied the KoMets 57-57.

“When it started getting close they started to rally around each other,” Hugstad-Vaa said. “I’m really proud of how they played hard and when things did get tight, they didn’t give up.”

Bryn Woodside made a basket to give the Tigers a 59-57 lead which was followed by a 3-pointer by Megan Kortan. 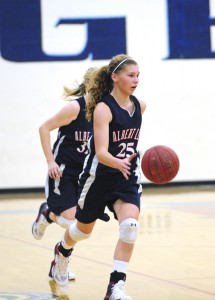 With the exception of a layup by McKenzie Zuniga with 33 seconds left in the game, the Tigers’ remaining points were scored on the free throws.

The Tigers’ next game is against Austin on Tuesday at 7:30 p.m.