Butterfly houses are likely to be inhabited by spiders or wasps

“Everything is nearly copacetic. I used some mouthwash this morning that’s supposed to kill germs on contact. Now I have a mouth full of dead things. If my left hand itches, it means I’m getting money and if my right hand itches it means I’m going to have company. And if both hands itch, it means that the vine I touched was poison ivy. I’m jealous of the preschoolers who are really schoolers. I never went to nursery school. When I was of that age, Pop dropped me off at the nursery. I’d plant 250 trees and then he’d pick me up. Ma says Pop could have been a great NASCAR driver if he would have stopped and asked for directions. Now Pop is retired. He was tired yesterday and he’s tired today. That’s retired. He has a screw in his hip and a screw in his head that needs to be tightened, but other than that, he’s in great shape. He’s worried that good health is killing him. He tells everyone that he doesn’t get any TV show they talk about. He watches them. He just doesn’t get them. He stopped at Sushi’s Bait & Tackle Shop. He bought some minnows and then Sushi tackled him. That happens every year. Happy New Year.”

Something to crow about

I peered through the fog, searching a snag tree for a pileated or anything affiliated. Juncos flashed white on their tails in flight and a downy woodpecker made a sharp “pick” call. A crow voiced what sounded like, “Carl.” Maybe it was his name. I don’t know, but it seems to me that there are crows that think the sun comes up just to hear them caw. One of this crow’s corvid (the family of birds that includes cows, jays, ravens and magpies) companions was on the road feeding on roadkill. It cawed in reply to the other crow or perhaps it was giving its compliments to the Chevy for the carrion. Though they eat roadkill, crows generally cannot themselves tear open the skin of dead animals. Like turkey vultures, they wait for something else to open the carcass or for decomposition to soften it sufficiently. Crows are always up to something. Henry Ward Beecher wrote, “If men had wings and bore black feathers, few of them would be clever enough to be crows.” Crows are omnivorous, eating almost anything. A friend told me that he had to “eat crow” at his workplace. That meant that he was forced to admit a mistake that was likely humiliating. The term’s origin has been lost, although it might be that it involved a War of 1812 encounter in which a British officer made an American soldier eat part of a crow he had shot in British territory. There is a reason McDonald’s doesn’t offer crow. The meat is unsavory, unless you’re an owl.

For those whose dreams are haunted by white Christmases

For those who dream of a white Christmas, pay attention to the weather on Dec. 13, the Feast of St. Lucia. Legend says that sunny weather on that day foretells snow on Christmas. If St. Lucy’s day be bright, Christmas day will be dark with snow; but if the snow falls on St. Lucy, Christmas will be clear and sunny. 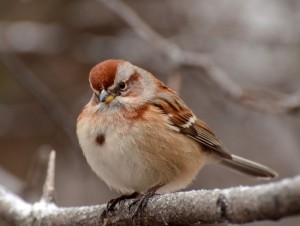 Darcy Sime took this photo of an American tree sparrow.

“Do butterfly houses work?” Not to house butterflies. They are decorative and are more likely to be inhabited by spiders and wasps than butterflies.

“Can birds predict the weather?” Apparently, most birds can sense small changes in barometric pressure. If the activity at bird feeders becomes more intense than normal, a storm may be approaching. During storms, a feeder becomes a reliable source of food. Birds are not dependent on feeders, but the foods offered there might make it easier for birds to weather a storm. Besides, feeding them allows us the opportunity to see lovely creatures such as the American tree sparrow.

“How can I tell if it’s a centipede or a millipede that I see in my basement?” If you can’t catch it, it’s probably a centipede. They are very fast. They remind me of the four-legged chickens that are supposed to be delicious, but nobody knows for sure because they haven’t been able to catch one. The centipede has one pair of legs per body segment, the millipede has two pairs for each segment. The centipede generally has a flattened look, while the millipede is typically more rounded. Millipedes feed on decomposing organic matter and centipedes prey upon insects and spiders. Centipede derives from the Latin centi meaning, “hundred” and pedis meaning, “foot.”

Squash vine borers overwinter as pupae in the soil. They emerge as moths in late June and July. This coincides with the bloom of the common roadside plant chicory.

In winter, when the spruce grouse eats more food to maintain its mass and energy balance, its gizzard grows by about 75 percent, and other sections of the digestive tract increase in length by about 40 percent.

A friend told me that it is possible to hypnotize a dragonfly by waving a finger in a circle in front of its head. His theory is that because the dragonfly has so many eyes, trying to follow a finger makes it dizzy. Once it reaches a proper level of dizziness, it will even step onto the finger. I can’t wait to try charming a dragonfly next year.

“It is only possible to live happily ever after on a day to day basis.” — Margaret Bonnano

“If you can’t be happy now with what you have and who you are, you will not be happy when you get what you think you want. If you don’t know how to fully enjoy $500, you won’t enjoy $5,000 or $500,000. If you can’t fully enjoy taking a walk around the block with your mate, then you won’t enjoy going to Hawaii or Paris. I’m not saying that having more money or more recreation won’t make your life easier. It will. But it won’t make you happier because it can’t.” — Barbara DeAngelis