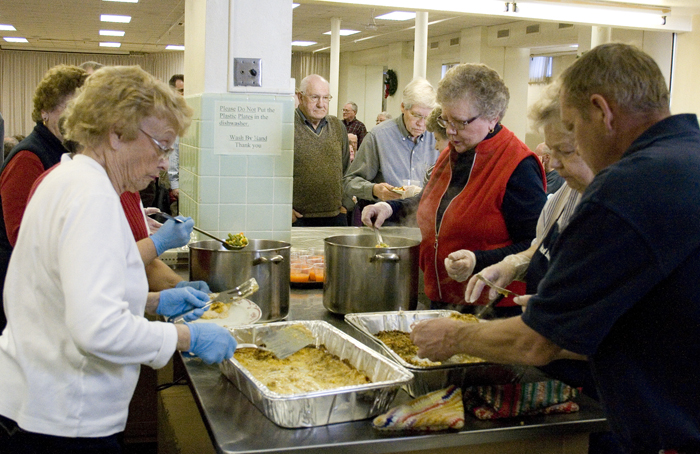 Members of service clubs across Albert Lea united Friday for what has become an annual Christmas tradition.

“I think it’s a chance to get all the service clubs together and mingle, to show support for each other and what they do for the community,” said Brady Gooden, president of the Freeborn County Jaycees. 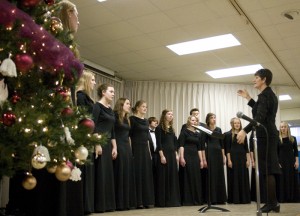 Diane Heaney leads the Albert Lea High School Chorale in a series of songs Friday at the annual service luncheon.

It was the 40th year for the event.

Each year, the organizations take turns hosting the event.

Gooden, who along with the Jaycees headed up this year’s luncheon, thanked the people present for their roles in Albert Lea, many of which are behind the scenes.

“Service clubs are a big part of any community,” he said.

Many of the people present belonged to multiple service organizations, including Albert Lean Larry Trampel who attended with his wife. 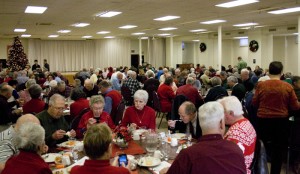 Trampel, who is retired, said he is a part of the Sertoma Club, the Beyond the Yellow Ribbon committee and the Albert Lea Salvation Army, among others.

“I just think it’s something worthwhile to do, be it that I’m retired,” he said.

He said he enjoys coming to the annual service club luncheon to meet with other people he knows from the community. The Sertoma Club — which stands for Service to Mankind — helps people in need, often people who are hearing impaired.

Following a lunch of chicken, mandarin orange salad, peas and carrots, rolls and dessert, the Albert Lea High School Chorale performed a selection of music, including Christmas classic “What Child is This?”

“It’s officially in my life part of the beginning of the Christmas season,” said resident Jan Jerdee. 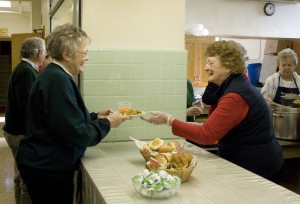 A First Lutheran Church volunteer hands a plate of food to a woman attending the annual service luncheon Friday.