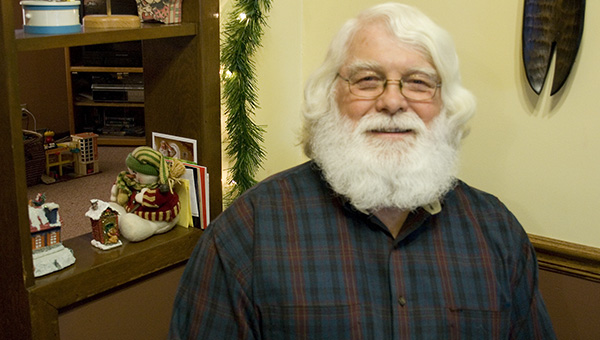 Every year in June Albert Lean Dave Mullenbach begins growing out his beard in preparation of the Christmas season. -- Sarah Stultz/Albert Lea Tribune

A.L. man each year transforms himself into a right jolly old elf

Every year in June, a twinkle begins to appear in the eyes of Albert Lean Dave Mullenbach.

From that point forward each year, Mullenbach, 69, starts to take on a part-time identity with North Pole ties.

Growing out his white beard and sometimes his hair — and wearing a handmade burgundy, velvet suit along with black fur-lined boots— he becomes the big guy that every child wishes to meet during the Christmas season.

“When people see the red suit, their eyes just get big and glow,” he said. “It’s really gratifying to see that because everybody smiles.”

For the last five years, Mullenbach has taken on a role of jolly, old St. Nicholas himself.

A retired IBM engineer, he has visited nursing homes, preschools, family parties and churches, among other places, to spread Christmas cheer.

“It just is really gratifying to see people smile and take away their thoughts that are bad or maybe depressing,” he said.

Twenty-five or 30 years ago, Mullenbach played Santa Claus for his own family parties.

“It just evolved because of my white hair,” he said.

One day he and his wife, Sandra, went out for breakfast with friends Nubbs and Kathi Wilder.

“I told him, I just thought he really looked like a Santa Claus — like the real Santa,” Kathi Wilder said. She offered to make him a Santa suit.

About three weeks later, Wilder said Mullenbach called her and asked if she was serious about the offer. He agreed to try it out.

Mullenbach and his wife purchased all of the materials, and the Wilders crafted the suit.

In addition to a three-quarters-length coat with pants, Mullenbach wears a white, long-sleeved shirt with red buttons underneath the coat, along with white gloves, a black leather belt, a Santa hat, small spectacles and rubber boots with fur sewn around the top.

He also carries with him what he describes as Santa’s magic key, which he explains he uses to deliver presents at houses without a chimney. He tells children he also has magical Christmas dust that allows him to come down a chimney carrying toys and to avoid barking dogs when he delivers the gifts. Lastly, he carries a set of bells.

Wilder said shortly after the suit was made, Mullenbach visited a group of children at Sibley Elementary School.

“Those kids, they truly believed this was the real Santa,” she said. “It has really been a gift for us to be able to be a part of that.”

Some children ask about his reindeer and others give his beard a tug to see if it is real.

“With the beard they have a little more instinct to believe in Santa Claus,” he said.

Even some of his own grandchildren have sometimes inquired if he was the real Santa.

He said the toughest question he ever received was from a young girl who asked if her mother and father could get back together.

Mullenbach said while he mainly volunteers in the position, if people do pay him, then he donates a majority of his proceeds back to cancer research or to the American Legion Leo Carey Post 56.