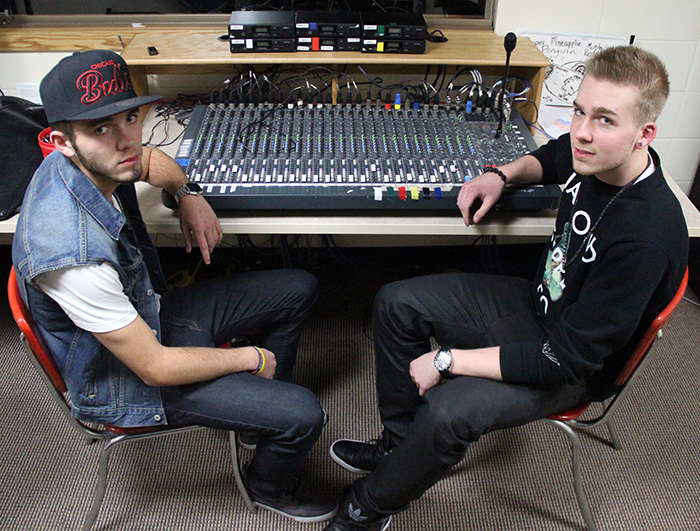 Two high school seniors are taking their dreams and making them a reality.

Albert Lea High School students Miles Erdman and Tyler Shaw, both 18, created their own album and already are working on a second. The two first started rapping and dancing together when they were freshmen, and their sound has evolved from there. The album, called “XIII Dreams,” has 15 songs that have rapping and singing with influences from various genres.

Some of the musical influences include hip-hop, pop, rhythm and blues, and rap. Though there is a lot of rapping on the album, the boys said it’s not explicit and said they didn’t see the need to swear like many rappers do.

“Anyone can listen to it regardless of their age,” Erdman said.

The name of their album has a special significance as well. The number 13 means a lot to the two, especially since they have the same birthdate — Oct. 13, 1994. 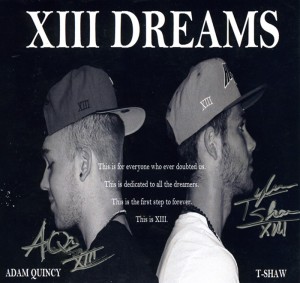 When they were younger they didn’t like each other much, but that all changed once basketball brought them together and they learned more about each other. And 13 is significant in other ways, like the fact that they graduate in 2013 and that their album has 13 songs (plus two bonus tracks.)

“Each song represents a different part of our story so far,” Shaw said.

They both spent their own money and time out of school working on the project. An ALHS grad, Jairo Campos, helped them record and mix the music at his studio in Burnsville.

Though Erdman and Shaw first started rapping together years ago, they didn’t try performing until Tigers Roar last year. They also had a breakout performance during the high school show choir’s competition. After that they were hooked, and the idea to create an album became more of a goal than a dream.

“I love performing on stage the most,” Erdman said. “We vibe off each other, and you get this feeling like you’re doing something pretty powerful.”

And while this album has only been available since Oct. 13, they’re already working on the next album, which tentatively is called “Fate.”

“We’re coming up with songs all the time,” Shaw said.

Right now they don’t have a name for their duo, but they both have stage names they use while rapping and performing. Erdman goes by Adam Quincy, and Shaw is T-Shaw on stage. They also call their fans Thirteeners. The boys said they’ve gained quite a following in the school, but they know that their music isn’t for everyone.

“We don’t let it get to us,” Shaw said. “We’re trying to be different than what’s out there.”

And though they want to be different, they’re also students of music and listen to many different varieties to get inspiration. They cite well-known artists Chris Brown, Michael Jackson, Elvis Presley, Usher and Eminem, as well as Minnesota artists Ray LaCrooks and Meech, as their influences.

“We have so many different influences,” Erdman said. “We have a story to tell the world and it’s our job to just keep telling it.”

Ultimately they want to keep making music and working together. After graduation they hope to both move to the Twin Cities and keep working on music. Their goal is to be able to make a living making music, touring and doing whatever else they can dream of.

Recently they shot an official music video, and it’s expected to debut soon on their YouTube channel: www.youtube.com/xiiidreams. They’re also both on Twitter using the handles @AdamQunicyXIII and @TShaw_XIII. People interested in buying an album — $10 — can reach them through those mediums or by contacting them directly or through their parents. Erdman is the son of Randy and Stephanie Erdman, and Shaw is the son of Keith and Tracy Shaw.