For most of her life, Albert Lean Alicia Ross Erickson has been known as the sister of “Happy Days” actress Marion Ross. 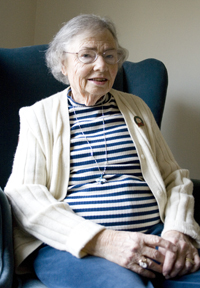 But this weekend, after months of writing and help from a local author, Erickson, 86, plans to release an autobiography to the community.

Titled “Take Two: A Love Story for Grown-ups,” the book delves into Erickson’s life both as a child and as an adult.

She will have a book signing from noon to 2 p.m. Sunday at Christ Episcopal Church.

According to Joan Claire Graham, who helped Erickson with the book, the story includes an account of Alicia, Marion and their brother, Gordon, who were children of an electrician and schoolteacher, and who grew up during the Great Depression, “when personal, family and religious values mattered more than economic hard times.”

“It evolves into an amazingly challenging, second-time-around love story that demonstrates her mastery of those early-learned values,” Graham said. 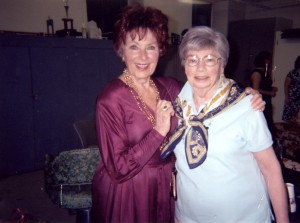 Sisters Marion Ross and Alicia Ross Erickson pose for a photo during one of Marion's visits to Albert Lea in the last few years. — Submitted

Erickson married and raised three sons in California before setting out on her own. Mid-life she worked for Episcopal Community services, became a licensed pilot and even took care of a terminally ill friend, Graham said.

“But her greatest and most noteworthy adventure began after she looked for and found the love of her life, a sailor who had wooed her before breaking her heart nearly a half century earlier,” Graham said.

Erickson said she hopes people of all ages can benefit from her book.

“I hope they’ll relate to the fact that a loving relationship can be very effective and healing,” she said.

She also hopes it gives people a feel for the World War II era and the hardships many faced.

“I want them to see the value of good parents with their feet on the ground,” she added.

Erickson said she began writing the book 10 years ago after her husband died.

“My life was interesting,” she said. “I made some drastic changes — some 180-degree changes — in my life, at a mid-life point, and I thought my sons would like to know.”

The book, which features a 1943 photo of Erickson and her childhood sweetheart on the cover, was published through Graham Megyeri Books and printed at BookMobile in Minneapolis.

Starting Monday, it will be available for purchase at Addie’s Floral.

What: Book signing for “Take Two: A Love Story for Grownups” by Alicia Ross Erickson