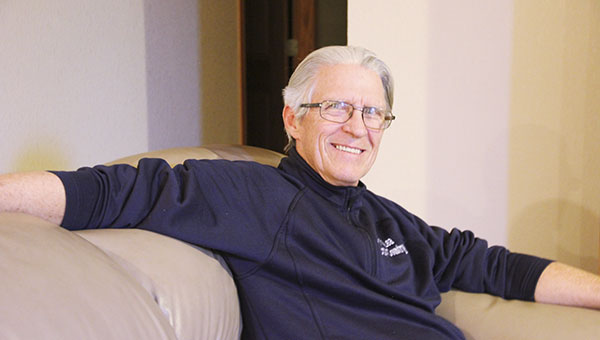 If a snapshot were taken of Lon Nelson at each hour throughout the workday, it’s very likely that he would be playing a different role in each shot. He might be a coach in one, teacher in another, grandfather in another and community volunteer in yet another.

In each picture, though, it would be evident that Nelson, 66, works to make life better for those around him.

To runners with Albert Lea High School, he is simply Coach Lon. It’s not an uncommon sight to see high school long distance runners jogging with Nelson riding alongside them on his moped.

“I actually have four mopeds: one blue, one silver and two black,” Nelson said.

He has been serving as either head coach or assistant coach for cross country and track teams for 30 years, 17 of those years for Albert Lea schools.

With all his experience and hours devoted to making athletes better, he has maintained one philosophy: Work hard and smart, and develop a winning attitude.

“I’m not always going to be there for the runners,” Nelson said of his laidback coaching style. “I want them to get the fire and gut by themselves.”

What is his most rewarding part of coaching?

“Seeing kids improve every year,” he said. “Just seeing them enjoy their sport.”

He had the privilege of coaching all-stars Ethan Marquardt, a 2009 ALHS graduate and current senior and top cross country runner at the University of South Dakota, and ALHS senior Chrissy Monson. He saw them make their marks in local long-distance-running history.

“Watching Chrissy win the state mile run was unforgettable,” Nelson said. She finished first in state in the 1,600-meter run in June 2011.

“There were a lot of teachers back then and special education was the only option for me,” Nelson said. “I thought I’d do something different but ended up sticking with it.”

He continued teaching in his hometown for 20 years, focusing mainly on junior high students with special needs. He took a teaching job for special needs students at Brookside Middle School and worked there from 1995 to 2000. In 2000, after he and his wife, Reatha Nelson, moved to Albert Lea, he began teaching at Halverson Elementary School. He was a full-time teacher there until 2010 and is now a substitute teacher there.

Even though he’s been retired the past three years, Nelson makes sure that the word “boredom” is not in his vocabulary. He enjoys helping Reatha, his wife of 44 years, in the Success Room with autistic students. He also volunteers as a prison mentor at the Minnesota Correctional Facility in Faribault, helps with respite care for Alzheimer’s men in Faribault and Albert Lea, and served as a Freeborn County youth mentor for eight years. He is on the support staff for the chaplains for the Truckstop Ministries program that Trail’s Travel Center holds. He also pushes wheelchairs during Senior Day and provides company for a man with Alzheimer’s from his church while the man’s wife runs errands.

In the past, he completed seven marathons, including the Grandma’s Marathon in Duluth and several Twin Cities marathons, and participated in canoe races in Morristown and Houston with his wife and some friends. When Nelson does have a rare spare moment, he enjoys beekeeping and spending time with his wife, three daughters, one son and their families.

Whether he’s in the classroom, at the track, or riding his moped, it’s certain that he’ll continue volunteering and helping out wherever and whenever he can. He’ll be living by the same philosophy he instills in his athletes: Work hard and smart and develop a winning attitude.