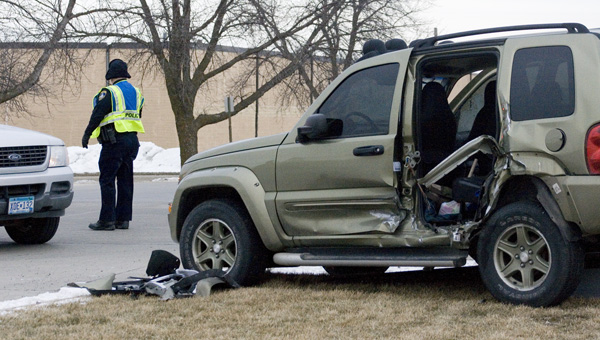 At least one person was injured Tuesday afternoon after a semi and Jeep collided near the intersection of Margaretha Avenue and 14th Street in Albert Lea. -- Sarah Stultz/Albert Lea Tribune

Three people were transported to Albert Lea’s hospital for minor injuries Tuesday afternoon after the vehicle they were riding in was struck by a tanker truck on Margaretha Avenue.

Rosa Maria Lara Rangel, 39, the driver of a 2002 Jeep Liberty, and passengers, Anuar Ralph Leo McCormick, 1, and Jovany Sanchez, 10, were treated at Mayo Clinic Health System in Albert Lea, according to police.

Reports stated Rangel was driving southbound on Margaretha Avenue approaching East 14th Street when her vehicle was struck by a 2003 Sterling tanker truck that was driving westbound on 14th Street carrying nonhazardous material.

The tanker’s driver, Brian David Bauman, 30, reportedly told police he stopped for a stop sign at the intersection with Margaretha, but didn’t see a vehicle and continued the intersection.

He collided with the back driver’s side of the Jeep, pulling off the door. After the crash, the door was stuck in the front grill of the tanker truck.