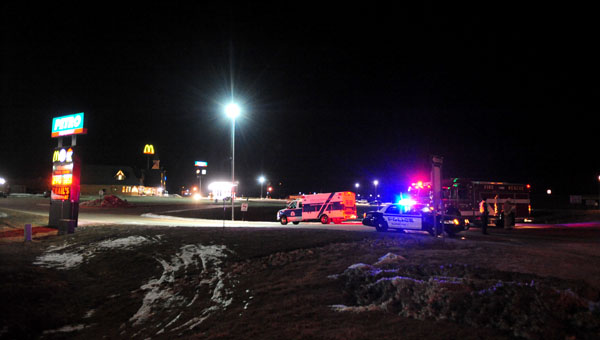 A police car, fire truck and an ambulance block off the entrance to Trail's Travel Center Tuesday night after a bomb threat. The Bloomington Bomb Squad was called. --Brandi Hagen/Albert Lea Tribune

A portion of Trail’s Travel Center in Albert Lea was closed for almost four hours Tuesday after police received a report of a bomb under a car in the parking lot.

The Bloomington Bomb Squad was called in to search a black Ford Crown Victoria parked near McDonald’s, but nothing was found, said Albert Lea Police Chief Dwaine Winkels. 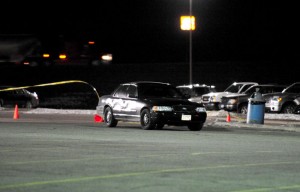 An area around a parked car at Trail's Travel Center is surrounded by police tape Tuesday after a bomb threat. --Brandi Hagen/Albert Lea Tribune

A 26-year-old Bloomington man, who was acting suspicious at the truck stop, was taken into custody and was transported to Mayo Clinic Health System in Albert Lea for a mental health evaluation, Winkels said.

The man’s name has not been released and no charges are expected at this time, said Lt. Jeff Strom of the Albert Lea Police Department.

Police were called to the truck stop just after 4 p.m. when dispatchers received the report. The man stated he had been in Iraq and Afghanistan and that he thought someone was watching him in McDonald’s.

Winkels said part of the travel center — including the Trail’s Restaurant and the other fast-food restaurants — were evacuated and the gas pumps were closed on the front side of the building. Truck drivers were able to pump diesel gas on the back of the building.

Officers blocked off the entrance to the parking lot for cars, and an area surrounding the suspected car was cordoned off with police tape.

The normal atmosphere at the travel center, at 840 Happy Trails Lane, is almost like an airport for Albert Lea, with travelers of all types coming and going. It was re-opened shortly before 8 p.m., according to Strom.