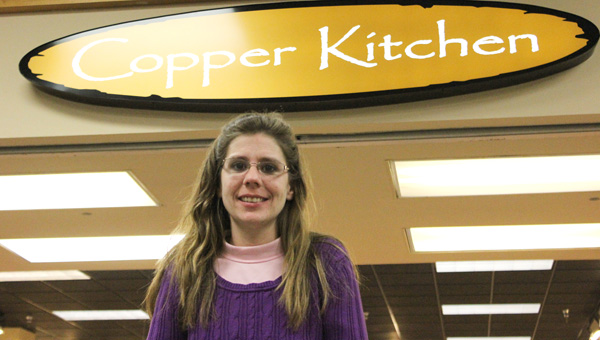 Linda Nelson stands outside of Copper Kitchen, the kitchen utensil and supplies store that she and her husband, Robert, opened in the Northbridge Mall. The family-owned store opened in November and is open from 10 a.m. to 9 p.m. on weekdays, 10 a.m. to 6 p.m. on Saturday, and 10 a.m. to 5 p.m. on Sunday. --Colleen Thompson/Albert Lea Tribune

Driving 40 miles from here to the closest kitchenware store in Medford in search of a cheese grater doesn’t sound too sensible. With Copper Kitchen now located in the Northbridge Mall, Albert Lean home cooks won’t have to go very far.

Robert and Lisa Nelson of Austin opened Copper Kitchen, a kitchen supplies store, on Nov. 19. The Black Friday mob after Thanksgiving gave them good starting sales, and there has been steady traffic since then. 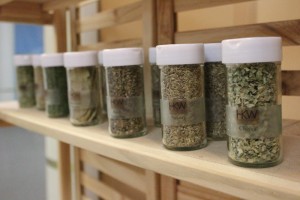 A fresh batch of spices line a shelf inside the Copper Kitchen. The Copper Kitchen opened on Nov. 19 in the Northbridge Mall and is owned by Robert and Lisa Nelson of Austin.

“We opened up at the perfect time,” Nelson said. “It’s worked out well so far.”

The Nelsons originally opened the Copper Kitchen in Austin in 2010 and stayed there for two years.

“We weren’t having much success in Austin,” Nelson explained. “The mall manager here had been chasing my husband to bring the store here, and we finally did.”

With all the expositions and activities that Northbridge Mall holds, people are constantly walking by the store and stopping in to browse. Albert Lea has taken a liking to the new store, Nelson said. 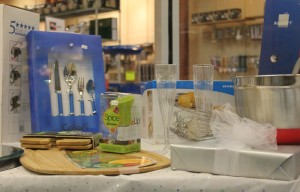 With the next closest kitchen supplies store being at the Medford Outlet Center, Albert Leans with culinary taste have a specialty shop available much closer to home now. From cookie sheets and cupcake pans to citrus juicers and fondue sets, the Copper Kitchen features a broad selection. It also offers specialized things, like forms for Danish aebleskivers and Norwegian wedding cake.

“I carry a lot of oddball things,” Nelson said.

The store also has a bridal registry available. Soon-to-be brides can come and pick out the items they like and make a wish list for friends and family.

“We hope the mall bridal expositions will help us,” Nelson said. 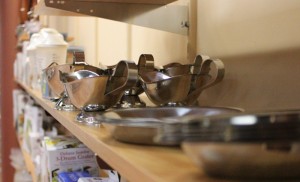 Stainless steel gravy boats are some of the many kitchen supplies the Copper Kitchen has to offer.

Because the store is relatively new to Northbridge, many shoppers wander in and browse, not quite sure what the store has to offer or what they will end up buying.

“We get a lot of people coming in asking about copper kitchenware,” Nelson said. “My husband and I just chose the name because it rolls of the tongue!”

In fact, the store doesn’t have copper items at all. Nelson said they are too expensive for what they are worth, and it can be hard to find good quality. Stainless steel, ceramic and the most popular, Swiss Diamond, are the main materials offered. Many appliances and cookware are imported from vendors in Switzerland, Belgium and Australia.

“We provide quality at a reasonable price,” Nelson said. “I’ve been told by many customers how reasonable our prices are.”

Along with pans, spices and specialty items, the store also includes cookbooks for $5. The recipes cover every kind of delicacy and many of them are favorite potluck dishes and desserts compiled by church women. All the cookbooks are purchased by the Copper Kitchen’s owners from church and other group’s fundraisers when extras are leftover.

The Nelsons have high hopes for their store’s future. Kitchenware is something that’s familiar to both of them. Robert was a former chef and previously owned a restaurant warehouse, and both of them share a passion for stirring up food.

“I do the baking, and my husband does the cooking,” Nelson said of their life at home. “We make a great team.”