Eagles and owls are unlikely to attack small animals

“Everything is nearly copacetic. I’m babysitting my sister Cruella’s cat. It’s an artistic feline. It built a castle in the litter box. Cruella has the family trait — she is tight. She bought a new car after the salesman told her that it could stop on a dime. She wore out the brakes in two hours. She ran out of bubble bath, so she used bubblegum instead. Last year was an interesting one. I spent one day mistakenly using my weed-whacker as a metal detector. I spent a day in the big city. I went for a ride in the taxi. It turned out that I didn’t have enough money to pay for the taxi ride, so the cab driver backed up until I could afford it. I hid from exercise for another 12 months. It’s not my idea. I’m in the fitness protection program. There is a thin person inside me who is screaming to get out, but for one more year, I’ve found that I could shut him up with pizza and jelly doughnuts. I still haven’t reached my promise as a world-class athlete. Maybe next year. Remember that game when I hit three men.” 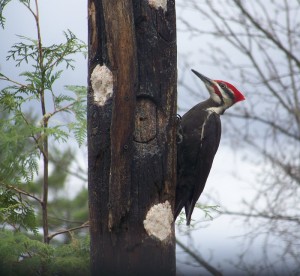 Photo of a pileated woodpecker by Al Batt.

“Pitcher? I was bowling at the time.”

Jim Johnson of Hartland lives near Spicer Lake. Squirrels are fond of raiding Jim’s bird feeders. Jim got so close to a squirrel on one feeder that he was able to give the squirrel’s tail a tug. It gave the squirrel quite a fright, and Jim thought he might have solved his squirrel problem. He had not. The next day, the squirrel reappeared at the feeder in the company of another squirrel — likely a sentry or a bodyguard.

Research has shown that while chickadees are regular visitors to feeders, 75 to 80 percent of their winter food supply comes from natural sources. When the temperature falls below 10 degrees, the survival rate of chickadees nearly doubles when they have access to feeders.

Research from the Georgia Institute of Technology showed that mosquitoes have the remarkable ability to shrug off impacts from raindrops more than 50 times their body mass, but are grounded in a thick fog.

The baby and the golden eagle

Millions of viewers watched a video on TV or on YouTube of a golden eagle stealing a baby. It was a hoax. Most of the accounts of such occurrences are from the late 19th and early 20th centuries and should be taken with a grain of salt. It’s unusual for eagles and owls to attack small dogs and cats.

In Thailand, elephants are helping to produce some of the world’s most expensive coffee. The exotic new brew, claimed to be earthy in flavor and smooth on the palate, is made from beans eaten by elephants and plucked from their dung. The coffee runs $500 per pound and a few luxury hotels charge $50 a serving. When an elephant eats the beans, its stomach acid breaks down the protein found in coffee, which is a key factor in its flavor.

Wally O’Neill of Eau Claire, Wis., writes, “I have seven feeders in the yard, all close together. Sometimes there will be anywhere from 30 to 50 birds feeding, then suddenly as one they fly off. Ten seconds later they start returning. Is this a survival mechanism, one flies all fly?” Birds gather for many reasons, one of which is for finding food and another is that it serves as a defense against predators. Having many eyes increases the chances of spotting a predator. Once the entire group takes flight, the predator may become confused and have trouble focusing on a single target. Any individual can initiate the movement of the other birds. When a Cooper’s hawk or sharp-shinned hawk flies through, birds take to the air. As might be expected, this makes birds nervous. If they think a predator is about, they’ll take flight at the proverbial drop of a hat. If another bird looks like it has seen something and flies, the others will, too. If a bird calls a warning (even a blue jay crying wolf), they will fly. Being part of a group is a means of self-preservation.

LaVonne McCombie of Hudson writes: “A friend who lives near the woods and has cedar siding on her home is experiencing an invasion by one or more pileated woodpeckers who are attacking her house. As we know, they can cause considerable damage, thus she is desperately wondering what can be done to discourage the unwelcome activity by this lovely bird?” The Cornell Lab of Ornithology tested six common long-term deterrents as to their effectiveness in preventing woodpecker damage. The methods tested were life-sized plastic owls, reflective streamers, plastic eyes on fishing lines, roost boxes, suet feeders and a sound system that broadcast woodpecker distress calls and the calls of a hawk. Only the streamers worked with any consistency. The shiny coating and the movement in the wind kept the woodpeckers at bay and eliminated damage at half of the test sites. Plastic owls and distress calls sometimes worked at first, but the woodpeckers became accustomed to them and reverted to their old habits. In this case, familiarity breeds disregard. Nothing worked all the time.
Wildlife Rehabilitation Center

“I thought of my friends who never take walks in Oklahoma ‘for there was nothing to see.’ I was amazed and grieved at their blindness. I longed to open their eyes to the wonders around them, to persuade people to love and cherish nature.” — Margaret Morse Nice