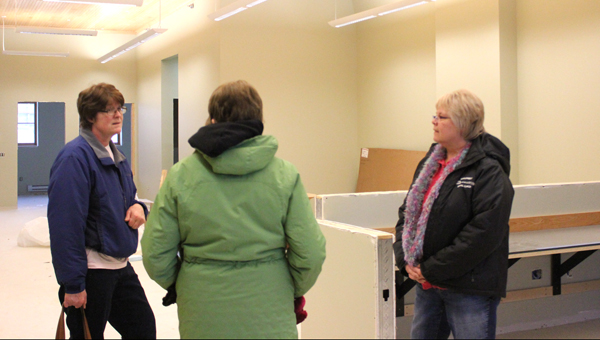 “We’re getting close,” said Barb Wildgrube, co-founder of the New Richland Area Historical Society and chairwoman for the New Richland Historic Preservation Commission. “And anxious to get this done. It’s been a long project.” 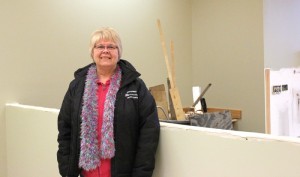 Barb Wildgrube stands Tuesday in the soon-to-be-completed library in New Richland. The Odd Fellows building is being renovated to give the library a new home.

She’s talking about a new library being put into one of New Richland’s most historic buildings located on South Broadway. The building had previous been a variety store, a grocery store, held graduations and the first silent movies. It was built in 1902 and the city bought it in 2002.

In order to get state grant funding, the city needed to have an idea of what it wanted to do with the historic building. A library was tossed about, and it seemed to fit.

“A library is something anyone and everyone can use,” Wildgrube said.

From there, the city created a Historic Preservation Commission, which was to supervise the care and restoration of the building.

The library should have been up and running by the end of 2012, but now they’re shooting for some time in April as the target date to open.

It’s been more than a decade in the making. They were hoping it would take less time, Wildgrube said. The process took a little longer because it took a year to apply for grant money before they could start the work. 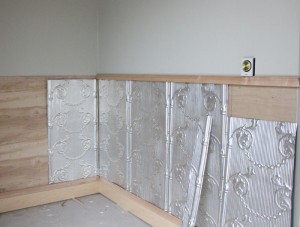 The entryway in the renovated Odd Fellows building in New Richland Tuesday. It will have pressed tin in the entry, to replicate how the building used to have it all around.

In total, Wildgrube estimated the project was around $300,000. That includes grant money and donations. They got the word out to donate by sending out fliers to people in the area and patrons of the library, Wildgrube said.

“We sent out a plea to help,” Wildgrube said. “People have just donated it. We’ve just kind of gradually collected some money.”

The committee has also had book sales and breakfasts to raise funds.

The plan for the new library was designed in 2006 by Setzer Architects of Red Wing as they worked with members of the Historic Preservation Commission.

Steve DeLaitsch, a licensed contractor who lives in Waseca and has an art studio in New Richland, worked on ripping the front out during renovations and then starting over.

“It’s all new wood, but replicating what was there,” Wildgrude said.

There are new materials and doors and locks were rebuilt.

“As much that was original that we could keep, we did,” DeLaitsch said. “There’s layers of history here, too.”

Wildgrube and commission member Pam Goehring estimated that the new library is double, probably even triple, the size of the existing library building. So, the new digs will offer more space, along with more amenities. There will be four computers to use instead of the two they have now, a meeting room, a larger librarian desk and oh, maybe some more of another thing, too.

“We’re hoping to get a lot more books,” Wildgrube said.

Don’t forget about the young adults or kiddies, either.

“And a much bigger area for children,” Goehring said.

The library will also have Odd Fellows items on display, including an original parade flag from 1880 when the group first formed (found on eBay). They’ve also purchased an Odd Fellows throne to go in the library. Other items that were found in the Odd Fellows building will be on display. A display case will get changed throughout the year.

Linda Lynne is the current branch supervisor at the library in New Richland. She’s excited as she thinks about the new library finally being finished.

“The kids in town are just so eager to have a new library,” Lynne said.

They ask her frequently when it will be done, she said. Wildgrube is also excited to see the project come together. She also loves history, which is part of what drew her to this project.

“If we don’t take care of our buildings, we’re going to have holes all over,” Wildgrube said. “I just think it’s important to take care of what we have.

“It’s important for the city, basically.”