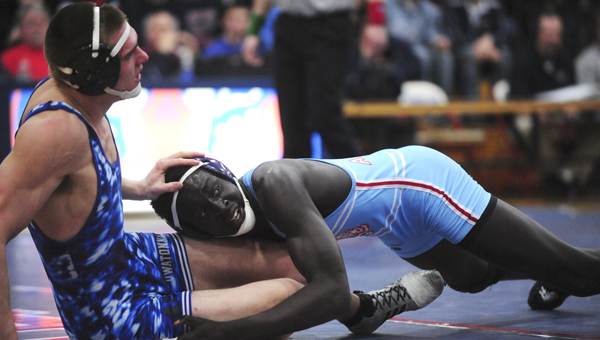 By Micah Bader and Heather Rule

In one of the most highly anticipated wrestling duals of the season, No. 4 Albert Lea fell 34-21 to No. 7 Owatonna at home on Saturday, as the Huskies earned the No. 1 seed in sectionals and the Big Nine Conference crown.

“We just didn’t have our best match tonight,” Albert Lea head coach Larry Goodnature said. “I’m not sure if it was nerves or what it was.”

In the night’s opening match, Owatonna’s Tanner Cole won by fall to give the Huskies a 6-0 lead, but it was the 113-pound match that was huge for the Huskies.

According to The Guillotine’s individual polls, Albert Lea’s Garrett Wangsness is ranked second in class 3A, and Owatonna’s Brandon Moen, an eighth grader, is ranked seventh. Garrett led the match until one second remained in the third period. That’s when Moen earned a near fall to win 7-6 by decision, extending Owatonna’s lead to nine points. Garrett previously built a 6-1 lead in the second period, but Moen narrowed his deficit to three points in the third, before getting the near fall.

“Owatonna came to wrestle. They deserve all the credit,” Albert Lea assistant coach Neal Skaar said. “They took charge and we could not recover.” 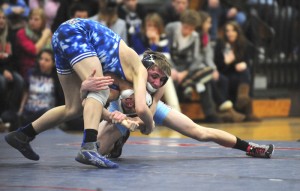 The Huskies had some confidence and the lead, but in a match with four lead changes, the momentum swung like a pendulum. Albert Lea’s Dakota Wangsness, Garrett’s twin brother, took it right back in the 120-pound match with a 13-4 major decision over Brenden Buryska.

Owatonna took a 12-10 lead after Bowen Schultz won the 138-pound weight class, but the Tigers fought back again, regaining the advantage 14-12 on a major decision by Lucas Hanson at 145-pounds.

The Huskies won the next two matches, but Albert Lea junior Bany Chan cut the Tigers’ deficit to one point with a major decision in the 170-pound weight class over opponent Ian Dunn. Aggressive wrestling helped Chan rack up the points to beat Dunn 18-4.

“I was just getting all my takedowns,” Chan said. “I just went out there and wrestled smart.”

“Bany really wrestled a good match,” Goodnature said. “He really came through for us.”

Owatonna won by an 8-6 decision in the 182-pound weight class, but Albert Lea’s Tristan Westerlund won the 195-pound match with a 4-2 decision. The win brought Tigers within one point again (22-21).

The Huskies earned falls in the 220 and 285-pound weight classes to preserve the win.

Albert Lea had no pins, yet it still had a chance to win the dual.

“Bonus points were big,” Goodnature said. “We didn’t get the bonus points we thought we’d get. They did a very nice job of holding us to regular decisions. Not falls.”

Though it wasn’t the result for which the Tigers were hoping, they look ahead to facing Owatonna in a postseason rematch.

“We just need to work hard and hopefully get them at sections,” Dakota said.

Albert Lea suffered just its second loss of the season. The Tigers are 16-2 overall. The Huskies snapped a four-dual winning streak for the Tigers.

Owatonna is 16-5 overall and extended its dual winning streak to eight.

The Tigers will look to bounce back with a meet versus Ellsworth Community Schools Thursday at Augsburg College in Minneapolis.