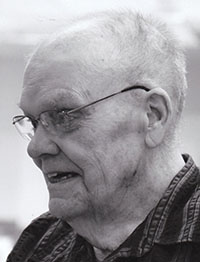 Kenneth W. Kruse was born May 25, 1920, to Gustive Adolph and Margaret Mina (Helmke) Kruse in Cameron Township. Kenneth grew up in Lake Wilson where he attended school. He worked for various farmers throughout his life. On Nov. 8, 1938, Kenneth was united in marriage to Johanna VanRuler in Flandrew, S.D. Kenneth served on the Cameron Township board for eight years. In 1967 Kenneth worked as a custodian at Lake Wilson High School until his retirement in 1985. He was a member of Good Shepherd Church where he served two terms on church council and was the Sunday school superintendent for eight years. Kenneth enjoyed hunting, fishing and spending time with his family. In 1991 the couple moved to Albert Lea and were members of Grace Lutheran Church.

Kenneth was preceded in death by his parents, wife Johanna, daughter Carol at age 3, and brother Gordon Kruse.