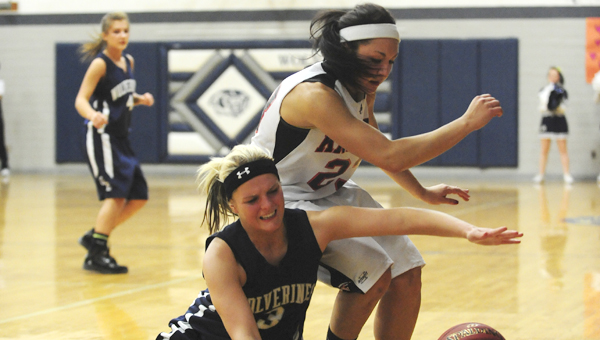 GLENVILLE — The Alden-Conger girls’ basketball team rebounded from three losses last week with a 59-18 victory over Glenville-Emmons in non-conference action on Monday.

“After a rough week, we just wanted to get back to the basics of what we’re supposed to be doing,” A-C head coach Jennifer Hovendick said.

G-E scored the first basket of the game, but A-C took a 10-2 lead with solid play on the offensive interior by sophomore center Liesel Theusch and junior center Brooke Reyerson.

“We had to be disciplined and work hard to get the ball inside,” Hovendick said. “Our girls are committed to it.”

The Wolverines got back into the game with a 3-pointer by junior guard Bre Lundmark, which cut G-E’s deficit to six points (11-5).

A-C responed with a 22-3 run by pounding the ball into the post to close out the half.

“It takes a lot of patience, and that’s what we’ve been preaching to our guards all week,” Hovendick said. “It was good to see it out on the court.”

With the exception of a basket on the next play by G-E’s Madi Ziebell on the game’s next possession, the Wolverines struggled shooting the ball.

Over the course of the game, G-E shot 13 percent from the field.

“They played good defense,” G-E head coach Lisa Ziebell said. “But, our kids, they hustled. They worked hard. You can’t ask more than that.”

A-C faired well from the field, making nearly 50 percent of its shots. Nine players scored for the Knights.

“With four more games this week, we’ve got to take advantage of opportunities to rest our starters,” Hovendick said. “It’s great to get those kids in the game who practice hard every day, but might not get many chances to play.”

The Wolverines fall to 1-12 on the season.