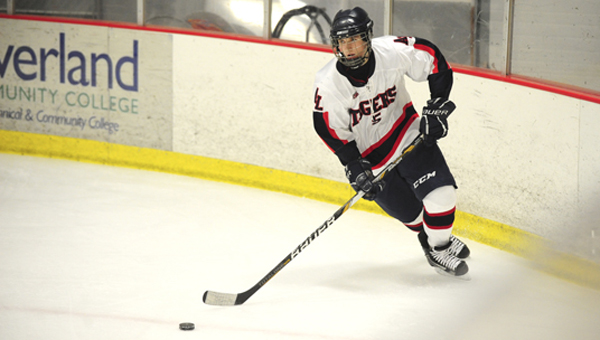 It was a tough Saturday afternoon at Roy Nystrom Arena for the Albert Lea boys’ hockey team, as it fell to Hibbing/Chisholm 7-1.

After starting the season with a record of 4-2, the Tigers dropped their fifth straight game.

The Bluejackets lit up the scoreboard early to take a 1-0 lead on a goal by Colten Perkins.

However, the Tigers wouldn’t allow another goal until the eight-minute mark in the second period by the Bluejackets’ Adam Johnson. 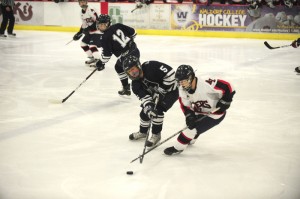 Larry Olson of Albert Lea battles for control of the puck, as Hibbing/Chisholm's Derek Abrahamson does the same. Micah Bader/Albert Lea Tribune

Albert Lea answered with a goal of its own by junior Kohl Kriewall off a ricochet. Two Tigers were credited with the assist: sophomore Alex Classen and junior Matt Cheever.

“I felt we came out and played well in the second period,” Albert Lea head coach Roy Nystrom said. “We just have to keep plugging away and score some more goals.”

The score cut the Tigers’ deficit to one point (2-1), but that was as close as the game would get.

In the second period, the Tigers only had one fewer shot attempt than the Bluejackets, but Hibbing/Chisholm had 36 total shots on goal compared to 17 for Albert Lea.

Tigers’ sophomore goalkeeper Garret Matz made some impressive saves, 29 total, but he was also placed in some tough 1-on-1 situations.