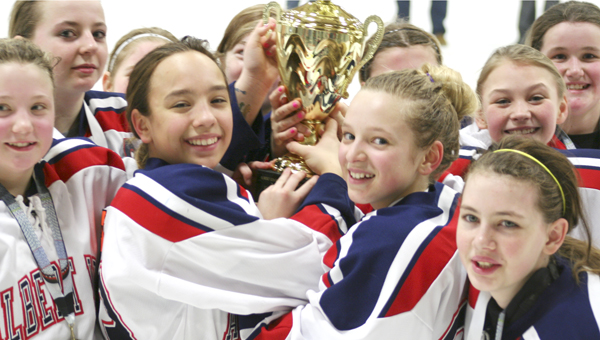 The Albert Lea U-12 girls' hockey team celebrates winning a tournament with an undefeated record. -- Submitted

In the championship game on Jan. 27, Albert Lea again faced off against Hudson in a tight skating game. Midway through the first period, Albert Lea’s Riley Hanson fired an accurate shot on goal, and Kylie Sundve knocked in the rebound for the only goal of the contest. 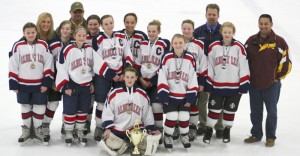 The Albert Lea U-12 girls' hockey team poses for a team photo after winning the championship at a four-team tournament at home. The Tigers earned wins over Hudson (twice), Armstrong Cooper and St.Peter/LeSueur. -- Submitted

Hudson came on strong in the final period with eight shots, but goalie Sky Anderson was strong in net and recorded her third shutout of the tournament. As Hudson applied pressure to even the score in the final period, Adison Malakowsky was tenacious on defense, clearing rebounds and tying up opposing players to prevent any second chance scoring opportunities.

The U12 team is in first place in league play and has an overall record of 19-4. Next, the Tigers will move on to post season tournaments.

The U12 girls team would like to congratulate the Albert Lea U10 girls team on their successful home tournament 2nd place finish. Thanks to tournament director Dave Wentzel and all the volunteers who made the weekend a success.

The team opened play with a 5-1 victory over Armstrong Cooper on Jan. 25. Ally Rassmussen led Albert Lea with a hat trick.

The U-10 Girls started Jan. 26 with a 2-0 victory over Rochester. Mia Fjelsta scored with an assist from Lauren Cookle and Ally Rasmussen added an unassisted goal in the first period for the Tigers. They continued to put pressure on the Rochester goalie throughout the whole game, tallying 28 shots on goal. Maddie Schneider recorded her first career shutout in goal for Albert Lea.

In the championship, the Tigers played extremely hard before falling to Faribault 4-1. Ally Rasmussen

The Albert Lea U-10 girls' hockey team holds a second-place trophy on the ice after a home tournament. The Tigers beat Armstrong Cooper and Rochester and fell to Faribault. -- Submitted

tallied the lone Albert Lea goal with Genevieve Hendrickson picking up the assist. Faribault took control of the game early and cruised to the championship with Albert Lea taking second place.

Maddie Schneider of Albert Lea was awarded the best goalie of the U-10 tournament. The best goalie award is in honor of Natasha Weigel who played goalie in the Albert Lea youth and high school hockey programs, but died as a result of a car accident in November of 2006. Weigel’s father, Doug, presented the trophy at the awards presentation after the Championship game on Jan 27.