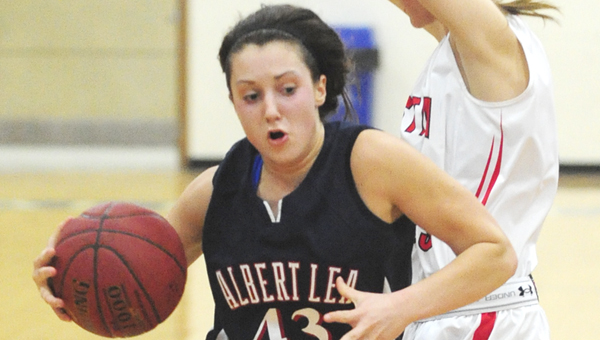 The Albert Lea girls’ basketball team fell short at the free-throw line and on the scoreboard, with a 65-55 loss to Austin during Breast Cancer Awareness Night on Thursday.

“We battled hard, but we just need to be more disciplined with our free throws,” Albert Lea head coach Lindsey Hugstad-Vaa said. “We’re getting fouled. We just need to be able to capitalize.”

Unfortunately for Albert Lea, the Tigers missed 17 shots from the charity stripe on the evening. 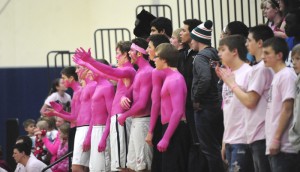 The Albert Lea student section disagrees with a call made on the court as the Tigers battled Austin. The students embraced Breast Cancer Awareness Night. -- Micah Bader/Albert Lea Tribune.

“We practice them every day. We shoot hundreds of them,” Hugstad-Vaa said. “In the game its different, and we need to adjust to the pressure and put them in.”

Despite free-throw problems, Albert Lea led 30-27 late in the first half.

Bryn Woodside and Megan Kortan hit back-to-back 3-pointers to give the Tigers the advantage. However, Austin went on an 8-2 run to give the Packers a three-point lead at the end of the first half.

Austin was able to build a 10-point lead with 12 minutes left in the second half. The Packers took the rest of the momentum with an Albert Lea offensive charge and technical.

In a gritty and physical game, both teams were in the double bonus in the second half. 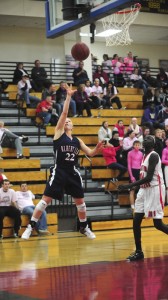 Bryn Woodside of shoots a layup on a fast break as a defender from Austin looks on. Woodside earned seven points and four assists. -- Micah Bader/Albert Lea Tribune.

Sydney Rehnelt and Kortan tied with a team-high 14 points for the Tigers.

“Syd had a good game offensively, and Megan shot the ball well and looked to attack,” Hugstad-Vaa said. “That’s great. She also rebounded and boxed out well.”

Lindsey Stewart led the Tigers on the glass with a team-high six rebounds.

Albert Lea has lost its fourth straight game and is 7-11 overall, 4-8 in the Big Nine Conference and 3-4 in its section.