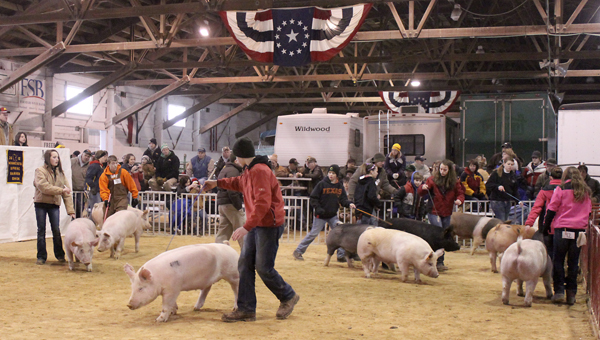 Members of FFA and 4-H from all over the Midwest walk their barrows around the judging arena last year. --Brandi Hagen/Albert Lea Tribune

Keeping youngsters interested in agriculture is one of the main goals for organizers of the annual Minnesota State Spring Barrow Show.

The 69th annual Minnesota State Spring Barrow Show is today at the Freeborn County Fairgrounds. Weigh-ins were on Wednesday and Thursday.

Around 100 exhibitors and 250 animals are expected each year. Some exhibitors bring up to six animals to the show. The number of exhibitors and animals has declined over the years; there used to be shows with up to 1,200 pigs.

The show remains an important part of local agriculture because it’s about the only type of event that allows local youth in agriculture the chance to show off their animals in what some consider the “off-season.”

It’s the only winter show in the area, so it gives exhibitors a chance to show their fall pigs and get a good market for their spring pigs. About 90 percent of the youth who participate are in 4-H or FFA and use this opportunity as a winter project, along with sharpening their skills for the state contest.

People come from all over the Midwest for the Minnesota State Spring Barrow Show, including as far south as Des Moines to the Wisconsin border, Winona and Worthington.

The show allows competitors, from kids through adults, to exhibit their livestock and participate in a judging contest.

Junior division exhibitors must be either 4-H or FFA members, and must be in at least the third grade. A kid’s class will be for those in the second grade or younger who wish to exhibit.

The 4-H food stand will again be available and will be run by the Conger 4-H Club.

Today: in the Judging Arena

8 to 9 a.m.: registration for judging contest

3 to 4 p.m.: judging of open individuals