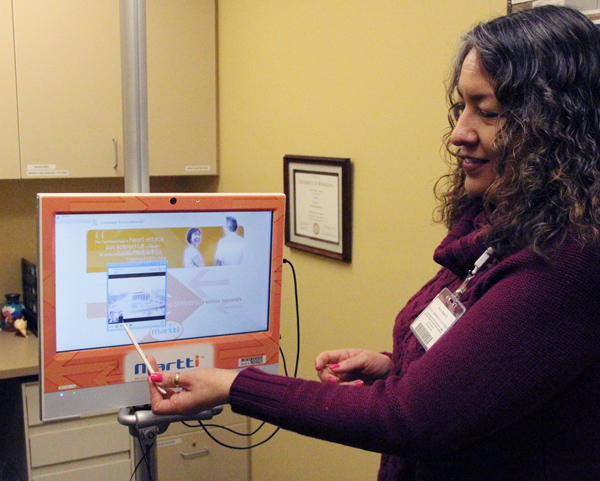 Glenna Kristy, manager of the language services department at Mayo Clinic Health System in Albert Lea, demonstrates how to use the Martti, a video interpreter device. –Kelli Lageson/Albert Lea Tribune

Medical professionals at Mayo Clinic Health System in Albert Lea have been praising a new resource that helps them communicate with patients who don’t speak English.

In November the hospital in Albert Lea started using a Martti, which stands for My Accessible Real Time Trusted Interpreter. The technology allows for video and audio conferencing with interpreters of about 200 different languages.

Glenna Kristy, the manager of language services at the Albert Lea location, said the Martti is just another resource they use but also that it’s been popular among the staff.

The Martti device can translate hundreds of languages, making it a valuable tool for medical professionals who need to communicate with patients. The video screen is attached to a pole with wheels, and it connects to the interpreting service wirelessly, which means it can travel anywhere in the hospital.

“They do really like the Martti better than the phone,” Kristy said.

The language services department also has five part-time staff who are trained to interpret Spanish. These staff members can answer phone calls or sit in on appointments as needed. But patients speak many other languages, so the hospital has always relied on an interpreter service over telephones. The Marttis allows for patients and providers to actually see interpreters, which is especially valuable for sign language.

There are three Martti stations at the Albert Lea location right now, and they cost about $1,400 each. The station comes with a video screen with an embedded camera and microphone. They’re set up on a pole with wheels so the Martti can be taken to any part of the hospital. It connects wirelessly with the interpretation service. There is the option of turning off the video screen, but retaining the audio translation, in situations where a patient needs privacy.

The three stations are used daily, and are usually housed in the emergency department, family practice and the obstetrician-gynecologist department. Kristy said those three areas use the Martti more than others, but anyone from any department can use it with a patient.

When any of the staff interpreters aren’t available, the Martti can also be used for Spanish interpreting. It’s also heavily used for Karen, a Burmese dialect, and Neur, a Sudanese language. Other languages the Albert Lea hospital commonly sees include Chinese, Vietnamese and Lao.

“It’s an emerging resource for any facility,” Kristy said. “We need to try and meet those needs.”

One goal has been just to let all patients know that language services staff are there to help them with anything. If patients don’t speak English, they can call the language services department directly, and someone there can get an interpreter on the line. Then they can work with the patient to set up appointments, get a question to a doctor and more.

Kristy said the Martti has been popular so that patients and medical professionals can work together alone. Otherwise some patients would bring in a friend or family member, which would take away patient privacy.

“People are very relieved they can come and talk to their provider,” Kristy said. “It’s a huge relief when there is that ability to communicate directly between a patient and provider.”