Flock of crows gather near Rock Dell for a meeting

“Everything is nearly copacetic. I’m a little worried about my weight.” 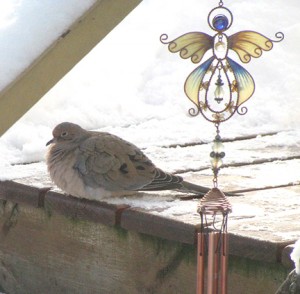 Tom Jessen of Madelia took this photo of a mourning dove.

“No, I need to put on some weight. When I was born, I weighed 7 pounds. Now I weigh 241 pounds. That means my average weight is 124 pounds. I thought about getting a paper shredder for all those old diet plans, but I decided that would be a needless expense. I have chickens. I threw the papers in the henhouse and they shred them naturally. I decided to give them all my business. I even tossed the old phone books in the henhouse. I noticed an odd thing. The chickens not only scratched and pecked the papers and used them as toilet paper, they ate some paper. I suppose it was for the fiber.

That’s why I eat cereal made from old wicker furniture. I gave my sister Cruella some eggs. She cracked one open while she was doing some baking. She found a piece of paper in it. It was from a phone book and it had a phone number on it. She called the number and talked to the guy who answered it for about an hour. Now, he’s her plumber. Can you believe that? And I’m not eggsaggerating.”

I drove past Rock Dell. It’s a name that has outlived any village that ever existed. There were hundreds of crows in a farm field. I pulled over and used my binoculars to see what the big birds were eating. They didn’t appear to be consuming anything. They weren’t mobbing a raptor. It was just a gathering. A meeting. A convention of crows.

Later, I looked out the window into our yard. There was a mash of birds there. I rattled off the names of the species in a kind of bird poetry. My bird nerditude shifted to a wish that a bird seen by one could be seen by all. I thanked the birds for being poetic. That’s right. I talk to chickadees, and I vote.

Whose nose was it?

The squirrel fell from the roof of my house onto a small platform feeder affixed to the window by suction cups. It was the first assault by a squirrel on that feeder in the good number of years it had been in place. I banged the glass with my hand. The squirrel didn’t flee. It looked my way. It didn’t have Betty Davis eyes. We swapped eyeballs for a bit. There was something about it that reminded me of the chicken of my school’s lunch program back in the days when the school lunch was usually one color — beige. My fowl meal was always the south end of a northbound chicken. The squirrel’s nose reminded me of that part of a clucker that we called the parson’s nose.

A hot pocket for a wren

In summer, it seems as if every woodland in the eastern U.S. sings “teakettle, teakettle.” The Carolina wren can be hard to see, but it has an amazingly loud voice for one so small. It has a rich cinnamon plumage, a white eyebrow and an upward-cocked tail. The Carolina wren thrives over much of the eastern U.S. Harsh winters can reduce local populations, but they soon recover.

In fact, this wren has been wintering farther north in recent decades. This allows us to see them in Minnesota. The species benefits from both forest fragmentation and reforestation as those things create tangled, shrubby habitat that is preferred by wrens. Carolina wrens love brush piles and profit from increased backyard bird feeding. They visit suet feeders and will take shelter in nest boxes containing dried grasses.

Brian Plath hosted a Carolina wren in his Austin yard. The bird found a large nest box to call home — the Plath’s garage. The wren came into the garage every night and either Brian or his wife would shut the door behind it. When they opened the garage door in the morning, the wren flew out. One day, it followed Brian’s wife into the house from the attached garage. We all make wrong turns.

Some bird stores sell roosting pockets. They are little shelters, like tiny birdhouses, where birds can roost and find shelter from the wind. Brian hung a discarded Baltimore oriole nest in the garage. The wren found the nest to be a good place to spend nights. If Brian came into the garage at night and turned on the lights, the wren did nothing more than peek out of the nest to see what was going on. It slept well, and why shouldn’t it have. The bird had the best wren house in town.

Verna Thiede of Owatonna writes, “We have been blessed to see dozens of redpolls at our feeders. Why are we seeing so many?”

Common redpolls nest from the southern edge of the Arctic tundra south into coniferous forests from Alaska to Newfoundland. The bulk of a common redpoll’s diet consists of the seeds of trees such as birches, alders and willows. In winters when the seed crop of these trees is exceptionally poor, large numbers of redpolls head south seeking food. When this occurs, it’s called an irruption. This is an irruption year. I suspect drought might be a cause.

Darwyn Olson of Hartland asks if red-tailed hawks migrate. Many red-tailed hawks do migrate south for the winter, but some individuals, especially older birds with established territories, may stay. More birds migrate during especially snowy winters as hawks have greater difficulty locating rodents hiding under snow.

The coldest temperature on Earth, 128.6 degrees below zero Fahrenheit, was recorded at the Soviet Vostok Station in Antarctica, on July 21, 1983.

The coldest temperature recorded in Minnesota was 60 degrees below on Feb. 2, 1996, in Tower.

“If we take the time, no matter how crazy and troubled we feel, we can find something to be thankful for.” — Terry Lynn Taylor