Genie of the Lamp 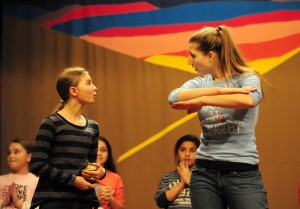 Aladdin, played by Sydney Collins, talks to the Genie of the Lamp, Rachel Pfenningwerth, a professional actress from New York, during a rehearsal of “Aladdin and His Magic Lamp” Thursday at Southwest Little Theater. The actors in the Prairie Fire Children’s Theatre performance are students from Sibley Elementary School. They will present to the public today at 7:30 p.m. and at 10:30 a.m. Saturday. --Brandi Hagen/Albert Lea Tribune 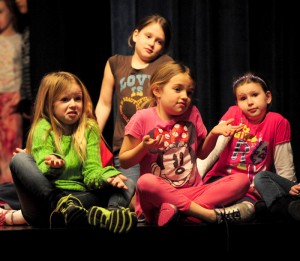 Eboni Weitzel, left, and Gracie Enser, center, signal to the audience that they have no idea where Aladdin’s magic lamp went. 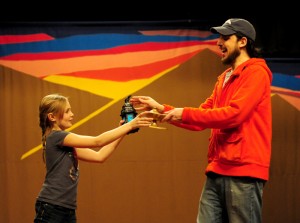 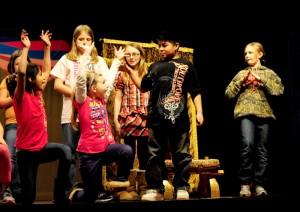 Abreham Baltazar, who plays the Sultan, sees what he gets in exchange for letting the princess and Aladdin marry. 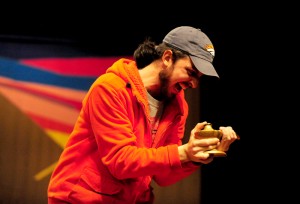 Randy Warshaw, a professional actor with Prairie Fire Children’s Theater, plays the role of a lamp peddler Thursday during a rehearsal at Southwest Little Theater. Warshaw and Rachel Pfenningwerth, both of New York, N.Y., worked with about 50 students from Sibley Elementary this week to put on the play “Aladdin and His Magic Lamp.”