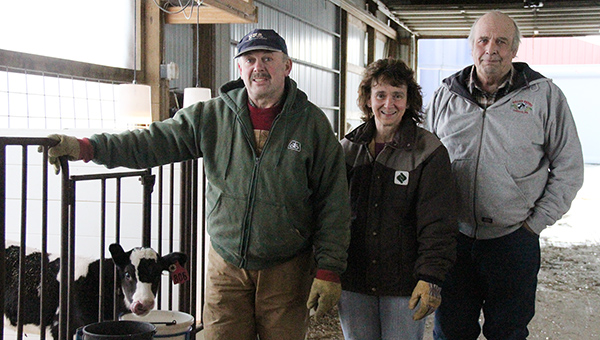 John, Alana and Dick Miller pose for a photo by one of their calves at the Miller dairy operation just north of Oakland. The Millers won the Farm Family of the Year Award today from the Albert Lea-Freeborn County Chamber of Commerce. –Kelli Lageson/Albert Lea Tribune

A close partnership between brothers has helped the Miller dairy operation stay successful over the years and now win the Albert Lea-Freeborn County Chamber of Commerce Farm Family of the Year Award.

John Miller works side by side with his brother, Dick, on a dairy farm just north of Oakland. The two will be accepting the award at the annual Ag Luncheon today, along with John’s wife, Alana. Miller hopes their two children, Jack and Lindsey, who are both college students, can also make it. Miller said he’s lived on the same farm since he was 4 years old, while Dick is on the family’s original farm that’s been in their name since 1862. Since 1979, the two brothers have had 120 dairy cows.

“We’ve been milking that many cows all the time,” Miller said. “We run 600 acres – it takes about half to grow our feed and the other half is cash crop.”

Miller said without his brother Dick that neither would be as successful as they are together. Their opposite personalities help keep the business balanced.

In addition to milking 120 cows every day of the week, they also raise heifers and steer.

“So we have about 300 head at all times,” Miller said. “Cows are calving all year ‘round.”

“We also host the Freeborn County third grade farm tours,” Miller said. “We enjoy it, though I must say it’s a lot of work.”

And running a dairy farm is a lot of work, too. Miller said there’s milking to do each day of the week, but that even harder is raising calves and keeping everything clean and maintained.

“It’s never ending,” Miller said. “About 5:30 in the morning I could sell you the cows pretty easy but then the second group comes through and I’m feeling good. Most days I’m pretty positive.”

Their family is also active in 4-H. Both Jack and Lindsey were members of the Moscow 4-H Club and showed steer and dairy heifers. Alana also volunteers with the 4-H group, and Jack said she likes to create interesting exhibits during dairy month in June. She made one that had dairy trivia and was displayed at Nick’s Meats in Hayward.

“My kids have worked on the farm ever since they were able to carry feed bales,” Miller said. “My son does a lot when he comes home – I’m proud of him for his willingness to take part in the business.”