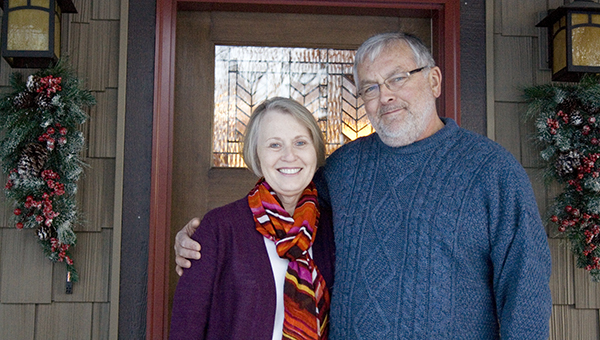 Joe and Katherine Pacovsky are the owners of the Czech Inn Bed & Breakfast & Retreat in rural Hayward. The inn was built in 2011 and opened in June of 2012. –Sarah Stultz/Albert Lea Tribune

Joe and Katherine Pacovsky know the ins and outs of bed and breakfasts.

For years they’ve liked to stay at them when they’re traveling.

So when the couple decided to build their own bed and breakfast in rural Hayward, they drew on their experiences to make their inn. 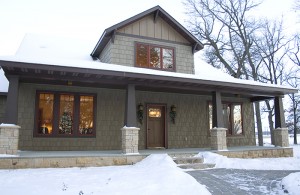 In honor of Joe’s family heritage, the couple opened the Czech Inn Bed & Breakfast & Retreat in June after eight months of construction.

The Mission-style inn features five guest rooms with options for twin or king-sized beds and private bathrooms off of each room, along with common areas including a library, dining room, parlor, kitchen, and craft or meeting room for gatherings.

It also features antiques from Katherine’s own homes growing up, along with other antiques she’s found.

The couple described the inn as a mix of “new construction and old world charm.” 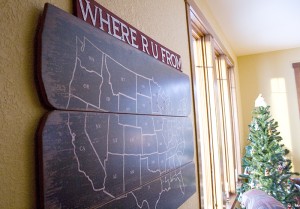 Next to the front door of the Czech Inn Bed & Breakfast & Retreat is a diagram of the United States where people can place a pin in the location they are from.

“It’s been very interesting,” Katherine said. “I think the guests are all really surprised at how nice it is.”

So far, they’ve had guests from as far west as Oregon and Nevada and on the East Coast from New Hampshire and Florida. A map of the country hangs by the front door, where people can insert a small pin showing where they are from.

Katherine said most people stay over the weekend, though there has been one guest who stayed a month. With the nearby Calico Hutch in Hayward, they have also had groups of quilters come for retreats. It is also a place where family reunions or romantic getaways can be held. 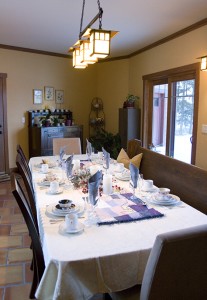 A table is set for guests at the Czech Inn Bed & Breakfast & Retreat.

“They come as guests and they leave as friends,” she said.

The inn was featured in the Tour of Homes last summer put on by the Albert Lea branch of the American Association of University Women. It has received tremendous support from the Albert Lea-Freeborn County Chamber of Commerce, she said.

The couple said in the future they only see the inn getting busier.

Joe said his grandfather bought the property that the inn sits on in 1939. His grandfather sold it to his oldest son in 1954, who died in 1984. That’s when Joe and Katherine purchased the 120-acre property at an auction. Joe grew up on a nearby farm. 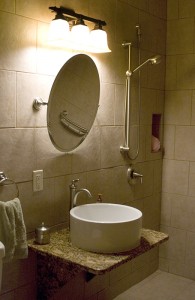 One of the bathrooms at the Czech Inn Bed & Breakfast & Retreat.

The Pocovskys said the land has mostly been rented out for crop farming until the couple decided to build the inn in 2011.

While Katherine is a retired nurse and runs the inn, Joe is still working as a municipal utility manager for the city of Marshfield, Wis. He helps out at the inn on the weekends.

The couple also has six cattle, and in the future Joe plans to have as many as 30.

The Pacovskys have three daughters and nine grandchildren.